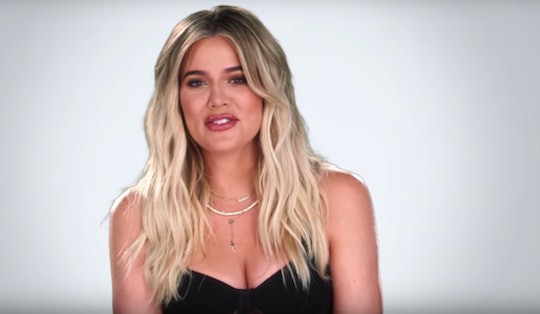 Will True Thompson Be On 'KUWTK'? Here's What Could Happen With Khloé Kardashian's Baby Girl

Unless you've been living under a rock, you're well aware of the fact that a certain American reality TV family has undergone quite the baby boom recently. Khloé Kardashian was the latest member of the family to give birth, so many fans might be wondering if they'll get to see more of her daughter and if True Thompson will be on Keeping Up With The Kardashians next season. Though nothing has been confirmed by the new mom or the production team yet, it seems likely that her baby girl could make her TV debut soon and here's why.

While fans shouldn't expect either outcomes, it wouldn't be a surprising if Kardashian let her daughter be filmed for her family's show. After all, most of the other Kardashian sisters who have kids have eventually allowed their children to be filmed, for at least a little bit of content. As her older sister, Kim Kardashian, told Billboard back in 2016, the decision to let her children appear on the show wasn't an easy one for her, but it sort of came naturally. "Both times when I was pregnant, I'd literally just pray, 'I hope my baby can handle this life,'" Kardashian said at the time, according to Billboard. "I believe their souls choose us to be their parents — that they choose this life. That's my belief."

So whatever the younger Kardashian mama decides to do will ultimately be up to her and whatever she feels comfortable with when it comes to filming. But if she decides to follow in her big sisters' footsteps, then hopefully KUWTK could be getting a new cast member.

Soon after she gave birth to baby True on April 12, the new mom was pretty private about her personal life — not sharing many photos or blog posts. However, she has opened a bit more about her life as a new mom in the last couple months and her daughter even has an Instagram account (with no photos posted yet). It's clear that the 33-year-old new mama has been enjoying these special moments with her baby girl, like putting together her nursery, getting her to sleep at night, or taking videos of her baby girl in the cutest pink tutu you'll ever see. Really, there would be so much to talk about on the show if she decided to allow True to be filmed.

However, if Kardashian decides not to make True a part of the newest season of KUWTK, it'd be more than understandable. As you may already know, just days before she gave birth, news broke that Kardashian's boyfriend, and father of her baby, Tristan Thompson allegedly cheating on her during her pregnancy after footage surfaced that purported to show him with multiple other women. Thompson and Kardashian's reps didn't immediately respond to Romper's request for comment regarding the cheating allegations. It's possible that she may decide to keep her daughter out the spotlight until all the other drama gets sorted out, or fizzles out.

With all that said, should fans expect to see baby True on their televisions when the upcoming season of KUWTK airs later this summer? Well, it's truly hard to say, pun intended. Initial reports of Kardashian's labor and delivery indicated that the family's show had sent cameras and crews to Cleveland, Ohio, where the Good American founder gave birth in order to film it all for the new season. According to People, multiple anonymous sources had confirmed that the E! series had people filming at the hospital when True was born.

So at first, it seemed like Kardashian would definitely feature True on KUWTK in the new season, at least her arrival. However, a report from Us Weekly just a little bit later contradicted those reports. According to the magazine, "production for Keeping Up With the Kardashians was not in Cleveland on Thursday, April 12, or Friday, April 13." On the other hand, though, Kris Jenner did indicate recently that Kardashian and True will be moving back to L.A. soon to be closer to family, which could be another sign that she'll be showing more of her life, perhaps including baby True, on the show.

What may or may not happen with True's TV debut is really anyone's guess. But if True's presence on the show evolves like her cousins before her, then she may slowly turn into a KUWTK regular one day.