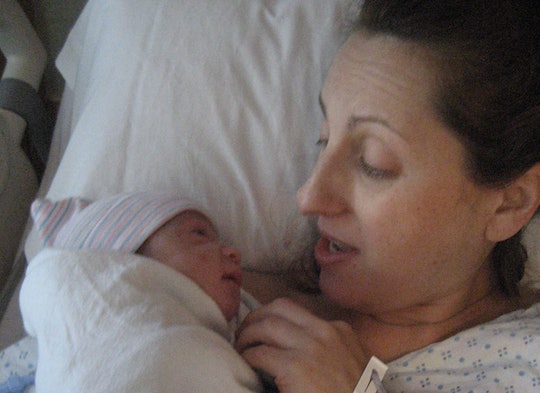 Actually, Yes. Writing Thank-You Notes Is The Right Thing To Do, Even If You're A New Mom

When I first became a mom, it was difficult to shed my people-pleaser tendencies. Even though I was functioning on a sleep deficit, I didn’t give myself much of a break. A perfect example of this is the effort I put into my “thank-you” cards for everyone who had sent us a baby gift. I hand-crafted each one, using an array of colored pencils, specifically citing the gift I was thanking the person for. I did this mostly hunched over my infant while she nursed, because I believed writing thank-you notes was the right thing to do, even if you’re a new mom.

My mother was a big note-writer. She had an enviable stash of creamy, scalloped-edged notecards, and an array of fountain pens that she kept tucked neatly in her designated stationery drawer. In third grade I had my first pen pal, a girl whose spelling mistakes frustrated me, but had impeccable handwriting. I wrote letters to my friends who went to sleepaway camp, and to my fourth grade bestie when she moved out to Long Island. There was no gift I received that my mother didn’t make sure I thanked the giver for, in written form. It was just good manners, and my behavior was a reflection on her, which is something I always rolled my eyes at, until I had a kid of my own.

The habit of writing thank-you notes was deeply ingrained in me. Admittedly, I pushed the it too far with my first baby. By the time I had my second child, I took a much more manageable approach; I chose pre-printed cards and just wrote one sentence inside about how much we appreciated the specific gift.

I didn’t wax poetic about how the plush rabbit would become a staple in our child’s stuffed animal menagerie for years to come, providing comfort and solace in times of need. (Yes, I really wrote stuff like that, as if the standard thank-you letter should take the form and tone of a eulogy.)

I really like getting snail mail from humans who know me. Don’t you?

I totally understand why the trend now is to get new moms off the hook of writing thank-yous. I mean, we have a lot going on, what with keeping a helpless tiny human alive and tending to our own basic needs so that we may provide for our children. We don’t need anything added to our plates, unless it’s absolutely necessary. Writing thank-you notes can be considered frivolous, and performative compared with our higher calling as parents. It’s an antiquated practice in our tech-driven, on-demand culture. If we don’t even like getting phone calls, why would we enjoy getting snail mail?

Except, I really like getting snail mail from humans who know me. Don’t you?

Fine; the nice feeling we get when we see someone has written to us doesn’t really matter in the grand scheme of things. In fact, maybe we might feel guilty that a new mom took the time to send a thank-you when she’s in the throes of early motherhood and all the stress, confusion, and bodily fluids that come with it. “Wow,” we might think. “She really didn’t need to write me this note. She’s raising a child, and all I did was buy the changing pad covers on her registry.”

Writing a letter felt meaningful. I wanted my friends and family to know that I really valued their support. And I wanted to continue getting it.

Though I have been that new mom who had a million better things to do, I still think that writing thank-you notes was the right thing.

Motherhood is lonely at times. When the new baby visitors stopped coming, and my partner had gone back to work, I spent a lot of time alone with an infant. Writing those thank-you notes was my way of keeping in touch with people. Sure, I had email and social media, and the occasional phone call, but writing a letter felt meaningful. I wanted my friends and family to know that I really valued their support. And I wanted to continue getting it.

It was basically the Golden Rule at work; I was doing unto others what I wanted done unto me. I was showing them kindness and gratitude for their efforts. I was showing them how I wanted to be treated. I was showing them that their gestures didn’t go unappreciated. By thanking them in this way, I was also laying the groundwork down for a future time when I might really need their help in ways, other than supplying us with packs of bibs.

As a parent, I never feel I have enough time, but taking a few moments to drop someone a line is worth it because I need to feel connected to other adults in my life. I am not just someone’s mom. I’m also a grown human, who likes to socialize and talk about non-baby things like movies and food and relationships. If I don’t make the effort to connect, I risk feeling isolated. My months home with my first child, born at the beginning of winter, when the trickle of visitors slowed down made me feel alone. Trolling parent community boards and scrolling through social media feeds didn’t do much to shore up a sense of connection. Talking to people, via text or phone or longhand and in person, made a difference to me.

So while I’m totally on board on not wasting a new mom’s (or any mom’s) time, the deeply personal act sending a thank-you note is not something I’ll regret. No, I don’t hold grudges against people who don’t send me thank-you notes. But to the ones who do, they can most certainly count on me for anything.