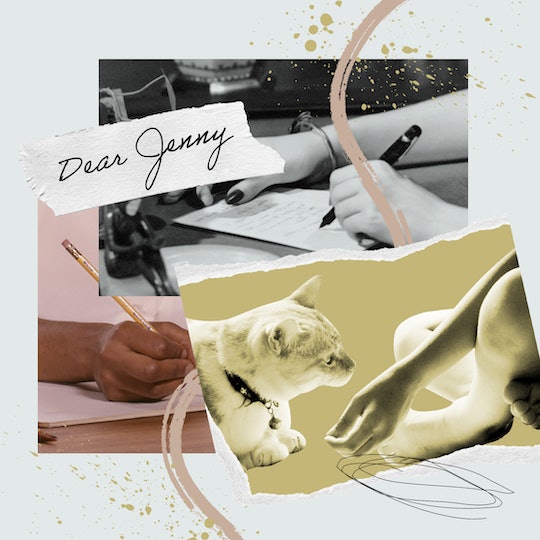 Dear Jenny: Our Cat Is About To Die And I'm Not Ready For My Kids' Questions

My kids haven’t experienced death yet, and I'm not sure where to start.

Our ancient cat is on her last legs, and we're sure that putting her down is imminent. I know I need to discuss this with my 4-year-old and 5-year-old, who have not experienced death yet, but I'm not sure where to start. Also I don't want to make them sad by talking about it, but also I don't know how to explain what death is. I mean, do you know?

I'm sitting on the futon in the office-slash-nursery-slash-guest-room with my son, Copper, who is 3. I have told him that Missy, our ancient dog, is getting old and that she will die soon. I'm reading him Lifetimes: The Beautiful Way to Explain Death to Children, because I saw it on the internet and my sole endeavor these past three years has been to acquire a kids' book on every topic, from tugboats, polar bears, patterns, and the life cycle of butterflies to multiracial identities, feminism, Jewish traditions, the Trail of Tears, and the March on Washington. We are That Household.

The book is beautiful. It has a calming cadence and photorealistic illustrations of living and dead things in nature. It also was published in 1983, so when I get to the part about people's lifetimes — "They live for sixty or seventy years" — I change it to "eighty or ninety years." (Three of his grandparents are in their eighties, and I'm not planning on going out early, so.)

Copper nestles into my arm, rapt. I close the book.

"But you're not going to die," he says, checking my face for confirmation.

I take a deep breath.

I was SO GOOD (I brag because THIS IS NOT NORMAL FOR ME). I did not say "not today" BECAUSE WHO KNOWS THERE'S PLENTY OF TIME BETWEEN NOW AND MIDNIGHT. I did not say "not for a very long time" because again WHO KNOWS: In the last three weeks, a person was murdered on the sidewalk a block and a half from our house in San Francisco, six people were shot in a reprisal a half block from our house, and a man was murdered in front of his children and dozens of other students at the same field in Oakland where my son has outdoor karate class.

Plus, as of this writing, more than a half million Americans, and 2.6 million people worldwide, dead from the pandemic. Death has been on my mind a lot lately.

After admitting to my son that I would die one day, I steeled myself for an emotional response. Panic? Fear? Grief? But: Nothing. He slid off the futon, sat down in his little chair at his little desk, and commenced drawing monsters and "machines that make blueberries."

I have no illusion that our conversation about death is done. But I'm relieved that we've started from a place of truth.

When it comes to death, we need to be straight with our kids about what's happening, which means avoiding euphemism (and hoo boy, are there a lot of them when it comes to death). This is for a simple reason: If we don't use words like "dead" or "died," kids won't get it (as illustrated by these fascinating short videos from an organization called What's Your Grief?). Importantly, also, lying messes kids up. Abstraction, or straight-up misdirection, leads to confusion, not comfort, and at worst can lead to anxiety or sleep issues.

I dealt with pet death a lot as a kid. We moved to Saudi Arabia when I was 4, and almost immediately we got two rabbits, which lived in a fenced-in area on the back of our trailer. Too bad about the stray dogs! Bye-bye, bunnies. Back in the States, Fluffy and Ralph Royster-Doyster were hit by cars right in front of our house, because we lived in a neighborhood just outside the city limits of Quincy, Illinois, where neighbors would speed past to get to the highway to get to Quincy, where there was fuck-all to do except drive through really fast.

"Cats come to the Pritchett house to die," my mom observed tartly.

By the time Ralph Royster-Doyster bought the farm, I had gotten used to death — sort of. But at least by then, I knew what was happening, and I could just deal with my own feelings about it, instead of wondering if my dad was evil for telling me we'd have to "put him down."

Of course, it's important to remember that kids of different ages have different levels of comprehension when it comes to death. Most preschoolers, for example, "don't understand that death is permanent," explains this useful tip sheet from Stanford's Lucile Packard Children's Hospital. Also, they "may feel that their thoughts or actions have caused the death and sadness of those around. They may have feelings of guilt and shame." So it's especially important to let your kids know what's happening, so they will know definitively that it isn't their fault.

Nonetheless, death is a tricky topic, because we can avoid euphemism and still end up in abstract territory, since no one knows what happens when we die (although a lot of people think they do!).

So take a deep breath, Meow, and tell your kids the truth in a gentle, supportive, and age-appropriate way: The cat is going to die. And as for what that means? Different people believe different things, but a couple things are certain: The cat will not be in any more pain, and we will miss her.

THERE'S NO ONE WAY TO EXPERIENCE DEATH BUT WE WILL ALL DO IT. Our kids need us to be honest with them about what’s happening so they can have their own authentic experiences and feel supported in the range and breadth of their sadness. I like this book for little kids, and another Romper writer likes this one. YOU GOT THIS.

Jenny True, aka Jenny Pritchett, is the author of You Look Tired: An Excruciatingly Honest Guide to New Parenthood (2021), available now from Running Press.