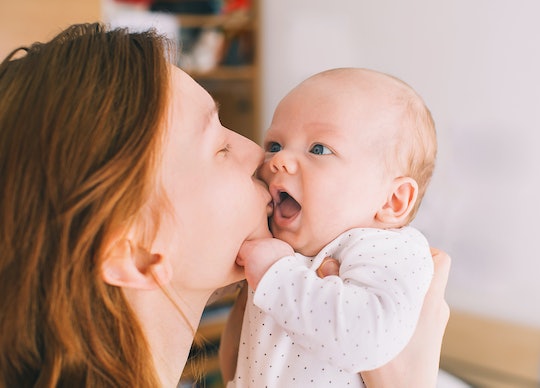 Here's How Your Baby Knows You're Its Mom

One of the biggest worries I had before giving birth was whether or not my baby would know I was his mom. Sure, he lived inside of me for almost a year. But once he was out in this great big world, how would he know the difference between me and my mom or mother-in-law, especially since they were so excited to be actively involved in the early days of his care? It didn't take long for me to realize that he could tell the difference between me and his grandmothers, but how does a baby know its mother? It all comes down to the senses.

A baby uses three important senses to help him identify his mom: his sense of hearing, his sense of smell, and his vision. According to the website for Parenting, a baby knows his mother's voice before birth, somewhere around seven months gestation. This means that by the time your little one is born, he already knows who you are just by the sound of your speaking voice. Baby Center noted that research done at the Pacific Lutheran University in Tacoma, Washington found that unborn babies actively listen to their mother's voice in the womb during the last ten weeks of pregnancy.

Dr. Alice Sterling Honig, professor emerita of child development at Syracuse University, told Parenting that babies not only recognize their mother's smell — they love it. The smell of your skin relaxes your baby, which is why skin-to-skin contact is so important. The site also noted that research has shown that infants as young as three days old can distinguish their mom's milk from someone else's just by its smell.

Babies can recognize their mothers' faces within a week after birth, according to Parents. Because a baby spends so much time at a close distance to his mom's face, he becomes somewhat of a facial recognition expert. Parents also noted that research performed at The University of Sheffield in England found that babies at six months of age are actually better at picking out individual faces among a group of people than adults.

If you are a mom-to-be worried that your baby won't recognize you, don't be. He's already in the process of getting to know you.