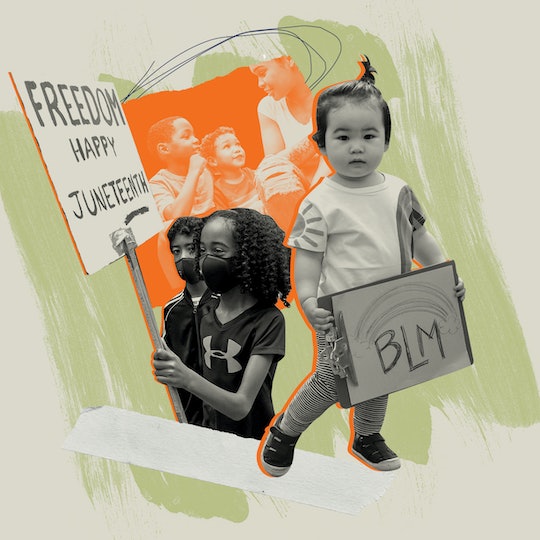 How To Explain Juneteenth To Your Kids — With Joy & Truth

“Juneteenth is a celebration, a day to reclaim joy and liberation.”

This is a popular slogan used for Juneteenth, and it couldn’t be more true. Black people in America are still oppressed, underrepresented, and screaming for equality, but Juneteenth is a day we celebrate because it represents the end of our people being enslaved.

On June 19th, 1865, Major General Gordon Granger and his Union Army troops rode into Galveston, Texas, to declare freedom for those still held captive there. This was two months after Confederate general Robert E. Lee’s surrender and almost two and a half years after President Lincoln signed the Emancipation Proclamation, the first major legal step for Black people’s right to live as Free American citizens and not property. So Juneteenth demands some fireworks!

If this is your first time getting that snippet of a history lesson, you’re not alone...

American history curriculums have long been whitewashed and the history of Black Americans reduced to their enslavement. You hear something about Harriet Tubman and Martin Luther King Jr., but you don’t learn about the accomplishments, stolen inventions, or other contributions Black people made to this country despite being enslaved. The educational system failed us by fueling this racist narrative, and since many states and school districts are banning Critical Race Theory from schools, along with broader diversity and inclusion efforts, it’s up to us as parents to educate our children on the good, the bad, and the ugly racism that’s been ingrained in this country from the start. To explain the significance of Juneteenth to them, we first have to confront these truths.

Every child should know the reality of this moment in history

But take a second to breathe. I know the tension and apprehension that rise when you think about discussing any aspect of racism and slavery with your precious babies. I feel it, too. But don’t let that stop you — every child should know the reality of this moment in history and understand its significance.

“Because of the legacy of enslavement, Juneteenth can feel heavy, but it doesn't have to be. Juneteenth is a celebration, a day to reclaim joy and liberation,” Yolanda Williams, parenting coach and founder of Parenting Decolonized, tells Romper.

To confidently engage your kids in this conversation, and with advice from Williams, here’s what you should do:

Start at the beginning

“Do your research about the history,” says Williams. The story of Black people doesn’t begin with slavery, and this is important to acknowledge so Black children understand the richness of their heritage — one that is often overlooked because of how perverse and lasting slavery was. But the story of our rich heritage continued to glow through the cracks despite the oppression.

Slavery in America was a brutal system used by white people. They stole Black people from their rich native land, sold them as chattel, ripped them from their families, beat them, and so much more. And this abuse lasted for hundreds of years, all so that slave owners could build their wealth on the free labor of the people they owned.

By laying out this timeline, children see the impact of how long those enslaved endured their captivity before being liberated. That’s why Juneteenth is also called Freedom Day.

Take all the help you can get from books and homeschool projects that detail what this time was like in history. Find sources that aren’t whitewashed, and offer the full truth behind the actions of white supremacists, like starting a Civil War in a fight to keep the institution of slavery. The National Museum of African American History and Culture offers a lot of useful resources.

“Make sure you have books that reflect Black joy and the full spectrum of our humanity, not just our continued fight for full liberation,” Williams tells Romper.

Find a nearby Juneteenth festival or parade

The first time Juneteenth was observed was in Austin, Texas, in 1867. Over the years, several states have celebrations to commemorate this pivotal day in our country. But it’s important to look into the authenticity of how it is acknowledged.

In the recent attempts by corporations to capitalize off of Juneteenth, like Walmart’s making a brand of ice cream for the holiday, or white business executive’s trying to trademark the name, it’s important to connect with Black event organizers for your celebrations. This will ensure that the purity of the day is kept and our continued struggle is respected.

These festivals are community events with music, parades, inspirational readings, cultural dances, food, flags, and beautiful Black people representing and reveling in the joy of our culture and triumphs thus far! Find one in your area and join in the celebration.

Include traditions practiced on this holiday

There are a few traditions during Juneteenth, and one is to buy from Black-Owned businesses. In my city, they make it easy by hosting a Melanin Market where Black business owners can set up shop for the public to purchase from them. If you don’t have one hosted in your community, do an online search to find businesses you can support.

If you’re purchasing from sites like Etsy for your Juneteenth slogan t-shirts or products, check the seller’s page first to make sure it’s a Black-Owned business. Many non-Black sellers try to profit off of this day.

Another tradition is to have a special drink. Williams says to “make sure you have the traditional red drink, which symbolizes perseverance and honors the blood that was shed for Africans and Afro-Americans during enslavement.” If you don’t have the drink, red punch and red foods like fruit and red velvet cake represent the same.

Use this opportunity to include your children in how your family chooses to honor this day. They may come up with some pretty unique ideas that can become a tradition for you all.

“Celebrating Freedom Day, the real Independence Day, is one way you can start the discussion around race in your home as well. You can model how to be the change you want to see for your children," says Williams. For non-Black families, this conversation, backed by your actions, can be a catalyst for anti-racism.

This article was originally published on June 17, 2021