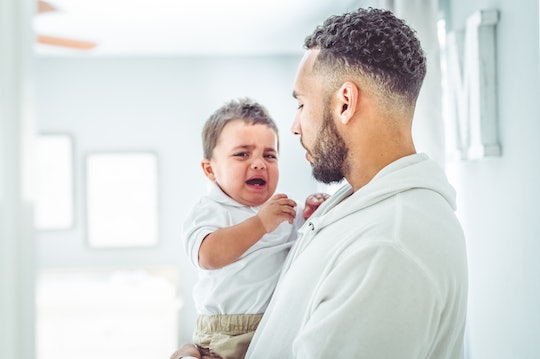 It Hurts When Your Child Says "I Don't Like Daddy," But Experts Say This Can Help

Try not to take it personally.

Children have a special way of warming our hearts, but they also have a special way of shocking us and kicking parents in the gut. One moment your little one is looking up at you adoringly and saying, "I love you, Mommy," and the next your toddler says, "I don't like Daddy.” This kind of strong expression is never what you expect to hear when you sign up for parenthood, but the truth is, such feelings of favoritism aren’t all that uncommon.

It may be shocking for a young child to suddenly reject a parent for no real reason, especially in a relationship where both parents are present in the kid’s life. You both gave this little person life and love. You both woke up at 2:00 a.m. to sate their hunger. You stifled your gag reflex to clean off the pile of mustardy poop halfway up their back. You traded nights out with friends for nights nursing your child through ear infections. You spent ridiculous amounts of money on cute clothing, jarred food, caterpillar toys that recited the alphabet, and car seats that were outgrown long before you expected them to be. You've watched PAW Patrol, Peppa Pig, and Rainbow Rangers until you wanted to put a foot through the TV. After all that, to have your own flesh and blood snub you or your partner seems like the ultimate betrayal.

When a toddler prefers Mom or Dad over the other parent, it can definitely hurt, but there are things you can do to work through it. For all you need to know about why this might happen, as well as what you can do about it as a parent, read on.

As hard as it is to be rejected by your child, it's also a very common stage. "Toddlers deciding to prefer one parent or another is completely normal,” assures Dr. Andrew Bernstein, M.D., FAAP, clinical assistant professor of pediatrics at the Northwestern University Feinberg School of Medicine. “It’s a normal part of their development and is part of their awareness of themselves and their abilities to make choices." And it can happen to either parent.

Bernstein tells Romper that this phase is more likely to happen in a two-parent household, where the child sees the parents every day, than it is in families where the parents are separated or divorced. That’s because snubbing Dad might actually be a sign that he is doing everything right in terms of being a loving parent, as the toddler knows that regardless of whether they show negative feelings toward one parent, they're still confident in that parent's love. Your little one knows they can say "I don't like Daddy" in the morning and still get a hug and bedtime story from him at night.

Still, knowing that this is a stage doesn't make it any less heart-stabbing. "It’s hard to be either parent in this situation — the favored parent often finds him- or herself doing more than their usual share of parenting responsibilities, while the less-favored parent often feels hurt and unloved," says Bernstein. Try your best not to take it too personally.

There is some research that indicates kids typically show a preference for their mothers over their fathers, due to moms usually being the primary caregiver. A 2013 study in Infant Behavior and Development found that regardless of the security of their attachment to each parent, distressed toddlers more often interacted with their primary caregiver.

But that isn’t always the case. In some cases, a child might be more attached to one parent because that parent’s routines just resonate more with the toddler at that time in their life. "Developing a secure attachment with a child requires the caregiver to sensitively and consistently tune into the child's signals and respond to them," Wyatt Fisher, a licensed clinical psychologist, tells Romper. So, if one parent is able to tune into the child’s signals better than the other, it only makes sense that the kid would prefer them for the time being.

What to do if your toddler prefers one parent

How do you stop your child from saying such hurtful words? Being resentful, scolding, and shaming won't work; a toddler is too young to be able to empathize or understand other people's feelings, and they are not trying to hurt either of you. Trying to reason with your child and say "Daddy loves you" may just make them dig in their heels harder.

A better approach, advises Bernstein, is to find opportunities for your partner and child to spend one-on-one time together, doing something they don't ordinarily do with you. Being taken by their parent to the zoo or to story time at the library may go a long way toward changing your child's mind.

Another strategy that often works is to have your partner take on one or more of the fun parenting responsibilities that usually fall on your shoulders. Your child may object to being dressed or read to by their other parent, but don't give in. You could say, "I’m busy right now, but I know Daddy would love to read Green Eggs and Ham to you."

No matter which parent is being rejected, it’s important for that parent to keep in mind that developing strong, healthy bonds with their toddler includes loving them and engaging with them fully, regardless of who is their favorite at any given moment. After all, your toddler’s preferences will likely shift many, many times — be it favorite food, book, or parent.

“I think that the most important thing for parents to remember is that a child who learns to make healthy attachments as a baby is more likely to have long-lasting relationships as an adult,” Dr. Jennifer Bragg, M.D., board-certified neonatologist in the Mount Sinai Health System in New York City, previously told Romper. “The key to forming strong bonds with your child is to enjoy the time you spend with them, engaging them as often as possible, and responding to their cues to reinforce that important parental bond. Acknowledging that parental preferences will most likely shift multiple times and in different situations is also key to not taking it to heart if a child prefers one parent over another.”

Above all, don't despair. Even though it may seem as though your child and their parent will be on the outs forever, "the toddler still loves that parent very much, and that parent is an important influence in the toddler’s life," Bernstein says. It won't be long before the phase passes and that parent is your child's best buddy again. Then you can start worrying about the teen years, when both of you will be the bad guy.

This article was originally published on April 19, 2019