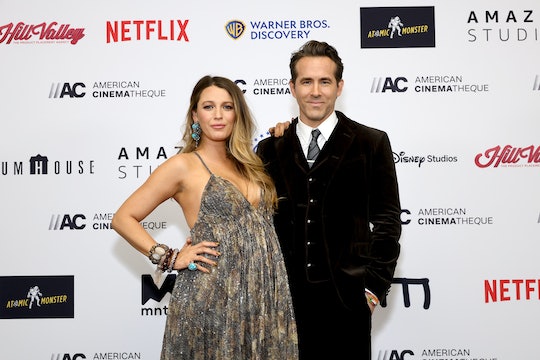 No, it’s not “just like having three kids.” (But keep telling yourself that if it helps!)

When I heard the news that Blake Lively and husband Ryan Reynolds were expecting their fourth child together (they’re already parents to James, 7; Ines, 5; and Betty, 2), my first thought was: Welcome to the club, B. You’re one of us now.

Not that I have much in common with a mega-gazillionaire celeb (I’m neither BFFs with Taylor Swift nor married to a superhero, sorry, honey), but I am a mom of four. Like Lively, I also had three daughters when I got pregnant with my fourth, who was born when I, too, was 35. In both our families, there’s a seven year age gap between the oldest and youngest kids.

Four kids. WOW. That’s something only influencer moms and celebrities do, right? Well, Lively ticks the second box, which probably helps with things like child care/space/finances/general home cleanliness/sanity. Her kids, unlike mine, probably won’t tell her they hate her because they have to share rooms and bunk beds. (But I’m sure mine will thank me one day because it’s such a nice bonding experience to be woken up by a screaming toddler at 6 a.m., right?)

It’s chaotic and messy, and there’s a lot of crying (the kids; also, me).

I’d love to impart some hard-earned wisdom from my own experiences navigating life as a mom-of-four… but, mostly, it’s a lot of “winging it.” Anyway, I’m too busy putting out fires to impart too much wisdom. Actual ones: a festive winter-scented candle I lit the other day accidentally set some paper towels alight while I was trying to put out multiple sibling-warfare waged emotional fires. But on the plus side, the real flames terrified everyone into bonding for, like, 15 minutes. I think we call that a win? Or: a regular Saturday morning.

It’s chaotic and messy, and there’s a lot of crying (the kids; also, me). There’s also more love, joy, spontaneity, and deliciousness in each moment of parenting than I could have imagined. Ultimately, this size family is a challenge I sometimes don’t remember signing up for — this may be why severely sleep-deprived, hormonal people are not best placed to make huge life decisions about family size — but having four kids helped free me from a lot of what I thought parenting was supposed to be, so I can enjoy it for what it is.

Here’s what I have learned…

The comments start the minute you share your pregnancy news.

So. Many. Opinions. Even more than remarks, I used to get “full frontal attacks of the face,” to quote Carrie Bradshaw. I got a lot of facial expressions, which said more than words ever could. Forget congratulations; most people wouldn’t bother to try to hide their abject horror when they saw me.

“Pregnant again!” they’d gasp, gesticulating wildly. I could hear their unspoken opinions: Is that really a good idea? Haven’t you heard of contraception? What makes you think you should be procreating again, because all of the evidence I’ve seen suggests you… should not?

Someone actually said to me (and I don’t think they were kidding): “Well, no point beating around the bush. At least now we don’t have to pretend you’re not insane.”

Everyone assumes you were hoping for a boy (or a girl, if you already have all boys).

There were the other parents, ones who’d wink at me as if they understood something unspoken. They’d approach wearing a conspiratorial half-smile, and whisper: “I’m rooting for you. Fourth time’s the charm, right?”

Lively wouldn’t need to ask them what the hell they’re talking about; with three daughters already, like I had, she’d swiftly understand that people assume she’s only having four kids to “get a boy.” Unfortunately, these comments can continue after you’ve given birth to your fourth in the set. People still come up to me with sad faces, telling me how bad they feel for my “outnumbered” husband.

But here’s the funny thing: Having four of a kind has been really freeing for me as a parent, since I know that “one stereotype fits all” parenting is pure nonsense. My daughters’ genders don’t dictate their varied personalities, interests, behaviors, or needs. Also, the older kids get, the more complicated parenting becomes. (Yes, it’s a lie that things get way easier; sorry!) The color of your baby’s monogrammed onesie feels less than inconsequential when you’re navigating real issues: friendships and social media and mental health and assessments for neurodiversity because you can’t figure out why your gorgeous 7-year-old is finding emotions impossible to regulate.

There is a big difference between three kids and four!

When the news broke of Lively’s latest pregnancy, and I saw that gorgeous, blooming-with-fourth-baby-glow picture of her, I was reminded of my own fourth pregnancy five-and-a-bit years ago, and this one time in the bathroom of a local restaurant, when I had a brief chat with another mom in my second child’s class. (We were at a birthday party.)

Me, naively: “Oh, everyone told me once you have three, you may as well have four since you’re already outnumbered, so I’m totally ready for it.”

“They lied,” she deadpanned.

I should say this was a mom who was super into having four kids (in fact, I vaguely remember hearing her speak of potentially going for a fifth), so this wasn’t the response of an embittered, regret-tinged parent. I now realize it was just everyday, exhausting reality.

Because yes, as I soon learned, there are lots of differences between three kids and four, and not just in terms of how people perceive you (three kids is “totally normal”; four is “batsh*t crazy.”). For starters, you can no longer fit in a regular car — we have an eight-seater that is way too wide for London’s narrow streets, and I find it extremely stressful to drive without denting. There is one positive: It’s so big and unsexy, people assume I’m an Uber driver rather than a panicky mother-of-four who can’t reverse her tank, so tend to be nicer when they see me behind the wheel.

We don’t really do “clubs.” Logistics, plus my extreme dislike of driving the Uber XL wannabe, make it extremely difficult to negotiate all of the pickups and drop-offs required; we also can’t afford to send everyone to all of the activities they want to try. Instead, we just hope everyone feels as passionate about cricket as their dad does. (That’s what the kids do every single weekend with him; it’s adorable and my NYC-born turned London-dwelling mind can never get enough.) My kids don’t speak Mandarin or have medals in gymnastics, and the younger ones are learning to swim through school, sporadically, rather than having outside lessons. This would have stressed me out in earlier stages of parenting; now, I understand we can’t do everything, and I don’t need to compare myself to other families.

Sleepovers at our place are stressful, so few and far between; even playground trips need to be rationed heavily. The closest analogy I can think of is the cornucopia scene in The Hunger Games: everyone flees my presence within seconds of arriving at the park and hides for the duration of our time there, occasionally sneaking back for a snack.

Parenting four kids is going to the supermarket one afternoon and watching a majority of the food disappear that same evening. It’s counting heads when you’re out — like you’re on a school trip every time you leave the house — to make sure you haven’t lost anyone.

I feel like I’ve become a better mom since I’ve had four kids, even though I’m pretty sure that on paper, everything is worse.

It’s understanding that things like mess, and sickness, are permanent visitors hanging out by the front door waiting to be let in. They won’t leave until they’ve ravaged through everyone and everything. Real-life parenting with four kids is lack of space, little-to-no paid parental leave, and a nationwide child care crisis.

It’s knowing that every single influencer pic you’ve seen with four posed and smiling kids is a blatant, choreographed, lie.

I’m a better mom now that I have four.

It’s also joyful. I hope it sounds like I love it, because it’s the best. I think I truly started enjoying parenting when I let go — of the need to control, of expectations, of trying to plan for every eventuality — which happened after my fourth. I feel like I’ve become a better mom since I’ve had four kids, even though I’m pretty sure that on paper, everything is worse. I care less (as in, I’ve stopped punishing myself for my failures), which is a beautiful thing. I also don’t care what other parents think of me, which is a pleasure in itself, and I try not to make assumptions about other families, especially big ones.

Surveys love to tell us how many children will make us happiest, but we know it’s not about quantity. No, it’s about making sure at least one child is young enough to look at you with worship in their eyes… so that when another calls you a “pathetic loser” (even glam, gorgeous, Serena van der Woodsen alter-egos aren’t immune to tween insults), you can still feel halfway decent about yourself.

Works for me, anyway! (At least, until I start laughing and remember my pelvic floor gave out two babies ago, circa 2015.)

More Like This
My C-Section Almost Derailed My 5th-Degree Back Belt — Almost.
My Slowest Marathon Ever Is The One That Makes Me Most Proud
Julia Fox's Apartment Tour Made My Nipple Hairs Stand On End
Why You Should Go Ahead And Have That Fourth Baby
What Parents Are Talking About — Delivered Straight To Your Inbox