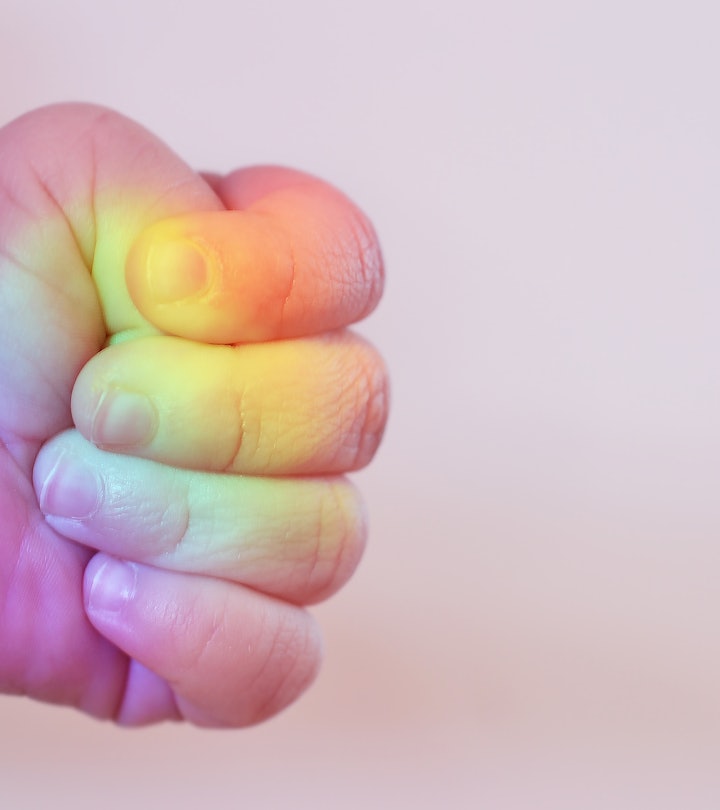 What Is A Rainbow Baby?

Here’s what makes them extra special.

Rainbow babies hold a special place in their families’ hearts. But before you go on thinking all babies are like little magical unicorns and should be called “rainbow babies” — it sounds so adorable, you might be tempted to do so — it is actually a specific phrase that reveals a particular hardship the family went through before their baby arrived. So what is a rainbow baby? You might want to sit down for this one.

Definition of a Rainbow Baby

“A rainbow baby is a baby who is born after a loss such as miscarriage, still birth, or death in infancy,” parenting coach, lactation consultant, and mom of two rainbow babies Leigh Anne O’Connor tells Romper. “They are called rainbow babies because they are a beam color and hope after a storm or dark time.” The term "rainbow baby" alludes to the particular happiness and relief (among other emotions) that you feel giving birth to a baby after you've come through the emotional storm of losing one.

The phrase started to gain major traction when Missouri-based photographer Alex Bolen captured a stunning image of mothers and their rainbow babies, as Cosmopolitan magazine explained. Not only was the photo visually moving, the story of each mother's loss was documented as well. Although each story is different, the common thread between them is the joy and hope experienced after the hardship of loss.

Although rainbow babies bring much happiness to a family, the swirl of emotions can be overwhelming for some moms. ”Parents who have a rainbow baby may have conflicting emotions, great joy for this new baby, fear of losing this baby who is here, and in some cases there can be guilt feelings,” says O’Connor. Parents in this situation may benefit from My Side of the Rainbow, a collection of resources related to baby loss, as well as the support of a personal therapist.

How should you react when a loved one is expecting a rainbow baby? “All new parents need support, but rainbow parents may need extra. The people around them need to be aware of this heightened sense of responsibility or added anxiety,” says O’Connor. Only mothers who have experienced this know what it's like to wander this particular minefield of feelings. When someone you know tells you they're pregnant with a rainbow baby, being aware and sensitive will show them how much you love and support them. To encourage a rainbow pregnancy, you should use the name of the lost baby warmly and without hesitation, don't change the birth order to exclude the lost child, and send a rainbow to the family to honor the loss while celebrating the pregnancy, rainbow mom Jennifer Canvasser explained in a HuffPost article. This is a sensitive time for the family, and being as supportive as possible is necessary.

In general, celebrating the arrival of rainbow babies also calls for compassion for their parents and families. “It is important to honor the babies who didn’t survive, acknowledge their existence no matter how brief. They were real; they were sparks of hopes and dreams and should not be erased,” says O’Connor. Rainbow babies are a gift to be celebrated, but being mindful of the feelings and emotional state of the parents is key when rejoicing in this news.

This article was originally published on April 5, 2017