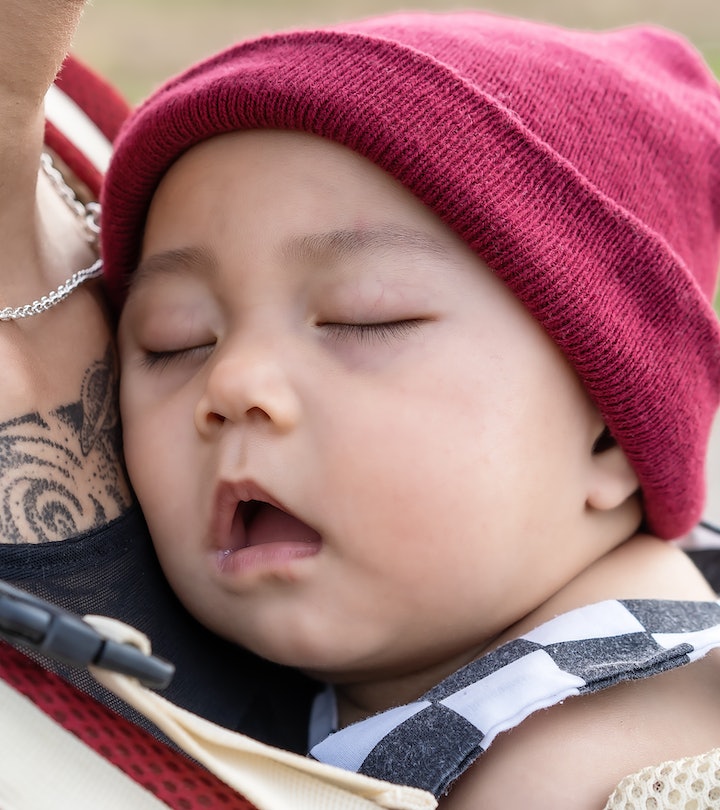 Why Does My Baby Sleep With Their Mouth Open?

When you’re used to your baby sleeping quietly with their mouth closed, it can be surprising when you check on them to find them snoozing, mouth open wide and maybe even snoring. It’s cute and amusing, but you may still be wondering why your baby is sleeping with their mouth open. Rest assured that just as your own mouth may fall open when you’re sleeping with a cold, usually it’s no big deal when kids do it too..

Why Does My Baby Sleep With Their Mouth Open?

Babies breathe primarily out of their noses for a good reason. “They need to use their mouth for eating and they need to be able to breathe while they are eating,” Dr. Whitney Casares, pediatrician, tells Romper. The technical term for this is “obligate nose breathers,” Dr. David Hill, pediatrician, explains, which means that babies breathe out of their noses with the exception of when they are crying.

So while it may look cute when your baby is in their crib with their mouth thrown open, it could be a sign that something else is at play. “In most cases, [sleeping with their mouths open is caused by] something as simple as viral upper respiratory infection. In other words, a cold,” Dr. Hill says. The congestion could also potentially be caused by allergies, though Dr. Hill says that’s rare.

Sometimes babies' mouths will just fall open naturally as they sleep. When they’re truly congested, usually you will hear sounds coming from their noses and be able to see the mucus, Dr. Casares says.

What Can I Do To Make My Baby Less Congested?

Rest assured that it’s usually safe to put your baby to sleep with a stuffy nose, but it could mean they (and therefore you) don’t end up getting the best night sleep. Babies should not take cold medicine, but that doesn’t mean there’s nothing you can do to ease their congestion. “You can run a cool mist humidifier in their room; I suggest cool mist because you can get it closer to their crib or area where they're sleeping without any harm of it getting too warm for them,” Dr. Casares tells Romper. Both she and Dr. Hill agree that sterile saline drops and a bulb suction device or the Nose Frida work well for clearing congestion. However, you don’t want to overdo it on the suctioning either, Dr. Casares says. “ I only recommend that parents are using nasal sprays [and suction bulbs] if the child is having so much congestion that it's difficult for them to eat or if it’s waking them up.” If you use it too regularly, she explains that it can cause “rebound congestion” wherein the nose gets irritated from all the suctioning and actually creates more snot.

If your baby’s mouth is open but they’re growing and their feeding and sleeping remain unchanged, “I wouldn't look for a more ominous problem,” Dr. Casares says.

Some research does show that mouth breathing in newborns can cause other problems down the line, including hindering the ability to suck and swallow. This will not happen from a few nights of an open mouth, however. “At the most severe, there is a condition called congenital choanal atresia in which the airway behind the nose doesn't develop properly. Those children are at risk of suffocating until the airway is repaired and often require respiratory support,” Dr. Hill tells Romper.

And if your toddler is sleeping with an open mouth but doesn’t seem to be congested, you may want to check their nostrils to see if something like a bead is blocking them. If you find a surprise in their nostril, don’t panic but “get that addressed quickly for the danger that they might be able to aspirate it deeper into the airway,” Dr. Hill says. Visit your pediatrician if possible to get it removed, and if not you can try what Dr. Hill calls, “the breath of life” (also known as “mother’s kiss”) where you block the clear nostril, the breath forcibly into your child’s mouth to dislodge the object in their nose.

In sum, in most instances, a baby sleeping with their mouth open is not cause for much concern, but of course you should always reach out to a pediatrician if you’re concerned.

David L. Hill, M.D., FAAP, Spokesperson for the American Academy of Pediatrics & Author of Co-Parenting Through Separation and Divorce: Putting Your Children First

This article was originally published on July 21, 2017