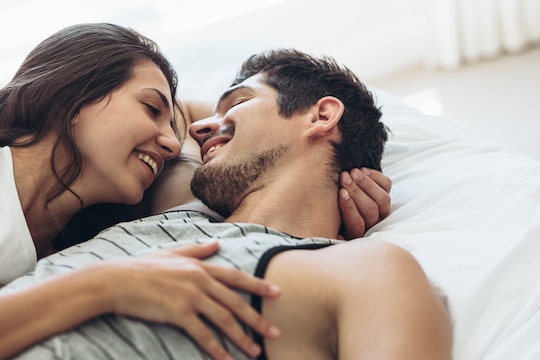 Let your libido be your guide.

You’d like to think that you and your partner have a healthy sex life. You love each other, and, well, your libidos are proof of that. But you’ve noticed that you’re looking for a lot more lovin’ lately. And it might be coincidence (or not), but you’re pretty sure that your period is also late. So is it that your partner’s abs are looking awesome, or could there be another reason? After all, is horniness a sign of early pregnancy?

When you’re actively trying to conceive a baby, sex can go from, well, sexy to being as scintillating as scrubbing dishes. But this isn’t what we’re talking about here. If your desire has doubled (or tripled), could it mean that you’re expecting? That depends, Dr. Jessica Shepherd, MD, an OB/GYN and Verywell Health’s Chief Medical Officer tells Romper. “Pregnancy brings about a multitude of physical and psychological changes in women which may include sexual arousal,” Dr. Shepherd explains. “There are changes in hormones early in pregnancy which allow some women to find that they have a higher sex drive than before they were pregnant.”

You might think, “Come on, now.” You know your body and you know that you want a lot more sex than usual. So what gives? Thing is, your increased sex drive isn’t all in your head — you might be feeling sexier and it does have something to do with pregnancy. “Pregnancy can increase blood flow to the genital area and pregnancy hormones can cause an increase in libido,” Dr. Cynthia Flynn, MD, an OB/GYN with JustAnswer tells Romper. “A lot of women do not notice that, as the other physical changes can decrease libido.” Basically, even though you’ve got extra blood rushing to your lady parts, the other joys of pregnancy (like nausea, fatigue, and just general discomfort) can combat that potential sexiness you feel. Adds Dr. Flynn: “In talking to women, most do not notice a change in sex drive. Feeling tired and or sick, can decrease sex drive and the hormonal changes do not always counteract these other issues.”

If you’re actually expecting and feeling like getting freaky, that’s a good thing because it’s not very common. That’s right, because a PubMed study found that the majority of pregnant women’s sex drives took a nosedive in the first trimester, and spiked back up again in the second and third trimesters. “Increased libido and arousal usually occur in the second trimester,” Dr. Flynn agrees.

Part of the issue comes from not knowing that you’re pregnant. If you only suspect that you’re expecting, you might actually have more sex than if you know that you are. Researchers found that sexual desire and frequency of intercourse plummets during the first trimester when women knew that they were already pregnant. So it would seem that the mystery of wondering whether you’re knocked up or not can be sexy.

Is It Safe To Have Sex During Your First Trimester?

You might assume that you’re pregnant — and more aroused than ever. But is all that action safe for baby? You shouldn’t worry too much about it. “Sexual intercourse is not harmful for women who are pregnant; however, if any woman has an obstetrical issue with bleeding in pregnancy, issues with the placenta, ruptured bag or water or on bed rest, sex should be under the advice of an OB/GYN,” advises Dr. Shepherd.

“The baby is well protected. In a healthy, low-risk pregnancy, sex can do nothing to harm the baby,” says Dr. Flynn. “Most pregnant moms are still worried though, and that likely puts a damper on overall sex drive.”

For the most part, being pregnant won’t spike your sex drive, especially in the first trimester when you’re battling other ailments that can be a mood killer. But if you think you might be pregnant, you can get a pregnancy test and follow up with your OB/GYN — if you can come up for air, that is.

Corbacioglu, A., Bakir, V., Akbayir, O., Goksedef, B., Akca, A. “The role of pregnancy awareness on female sexual function in early gestation” 2012.

More Like This
How Pregnancy Affects Your Teeth
Is Ginger Tea Safe During Pregnancy? Experts Weigh In
100 Pregnancy Milestone Instagram Captions For Every Memorable Moment
Can You Have Sex With Placenta Previa? Experts Explain