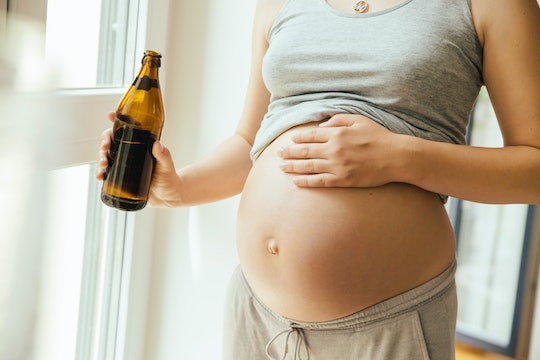 Drinking Non-Alcoholic Beer During Pregnancy Comes With Some Risks

You might want to back away from that (non-alcoholic) beer.

You know that drinking alcohol is a big no-no during pregnancy. But when everyone around you is cracking open a cold one, you might feel a little left out... and thirsty. And while you might not want to toss one (or two) back, you may want to explore some non-alcoholic alternatives. So can pregnant women drink non-alcoholic beer?

Why Is Alcohol Unsafe To Consume During Pregnancy?

The American College of Obstetricians and Gynecologists spells it out pretty explicitly: You shouldn’t drink any alcohol during your nine months. None. Moderate drinking can cause problems with baby’s learning and attention span, as well as negatively impacting their behavior and coordination (heavier drinking can result in lower-than-average height and weight and problems with brain development). “No amount of alcohol is deemed safe during pregnancy, given its link to fetal alcohol syndrome,” Dr. Kecia Gaither, MD, MPH, FACOG, double board-certified in OB/GYN and Maternal Fetal Medicine, Director of Perinatal Services at NYC Health + Hospitals/Lincoln tells Romper. “This syndrome consists of a triad of defects, such as growth restriction, abnormal faces, and neurodevelopmental delay.”

How Is Non-Alcoholic Beer Made?

But what about non-alcoholic beer, you think? Surely, it should be safer to drink than, say, a shot of tequila. But in order to understand why it’s non-alcoholic, you might be wondering how it’s made in the first place. Well, the process is pretty much the same as brewing traditional beer, according to Andrea Tran, RN, IBCLC, a registered nurse and lactation consultant. “Non-alcoholic beer is made from the same ingredients as regular beer,” says Tran. “It is made non-alcoholic by a couple of different methods, such as removing alcohol at the end of the brewing process, either by evaporation or filtration.” And since traditional beers contain about 4%-6% of alcohol, per About Alcohol, it would need to reach that 0.5% threshold to qualify as non-alcoholic.

Is Non-Alcoholic Beer Safe To Drink When You’re Pregnant?

If you’ve been stocking up on non-alcoholic beverages (like Beck’s Non-Alcoholic, Heineken 0.0, Budweiser Zero, and O’Doul’s Non Alcoholic Beer, for example), you might want to back away from that beer. Because here’s the thing about non-alcoholic beer — some of them are not actually non-alcoholic, according to Dr. Lauren Demosthenes, MD, an OB/GYN and Senior Medical Director with Babyscripts. “To be able to say that a beer is non-alcoholic, the beer must have less than 0.5% alcohol,” says Dr. Demosthenes. “So even though it may be low, no alcohol is considered safe during pregnancy.” A study published in PubMed found that of 45 various beverages that were marketed as non-alcoholic or had low alcohol content, 13 had ethanol levels that were higher than what was reported on the label. And six beverages that claimed to have no alcohol had more than 1% ethanol.

Even if a non-alcoholic beer only has 0.5% or less alcohol, it’s still not safe to drink during pregnancy. “Another thought is that a woman may drink more than one non-alcoholic beer when she thinks that it is safe,” Dr. Demosthenes says. “That could lead to more drinking than intended.” The more you drink, the more alcohol you wind up consuming in that “non-alcoholic” beer.

But even in the smallest amounts (such as you might find in non-alcoholic beer), it’s a danger to your unborn baby, lactation consultant Liza Janda, IBCLC tells Romper. “Any amount of alcohol can be metabolized by the mother’s body,” says Janda. “The fetus’ body does not have the ability to metabolize in the same way, so there will be higher concentrations of alcohol in the baby’s body and for a longer period.” On top of that, Janda warns that, “There is also much more sugar in these types of non-alcoholic drinks.”

Not to mention the alcohol that can linger not only in your body during pregnancy, but also in your breastmilk postpartum, too. A second study found that after drinking non-alcoholic beer, breastfeeding moms who participated in the study were asked to pump immediately after drinking as well as intervals of one and three hours later. Researchers found that there were trace amounts of alcohol in their breastmilk, making it unsafe for their babies to consume.

Should You Skip Non-Alcoholic Beer During Pregnancy?

Absolutely, the medical experts all agree. “The best advice is to refrain from drinking non-alcoholic products while trying to conceive or during pregnancy,” says Dr. Demosthenes. Adds Janda: “Err on the side of caution since you know nothing about how your own baby’s body will react to the alcohol,” she says. “When considering non-alcoholic beer, it’s better to avoid it entirely.”

Although you might miss the smell, taste, and even the feeling of a bottle of beer or a cold can in your hands, it’s not worth the risk to your or your baby’s health to consume a non-alcoholic beer. Be sure to read the label to ensure that the beer is actually alcohol-free. Once your baby is born, (and you’re still longing for a lager), speak with your OB/GYN or lactation consultant to see if it’s possible to safely consume an adult beverage while you’re breastfeeding. And until then, just know that banishing beer from your diet is a small sacrifice to ensure the health and well-being of your baby... and you.