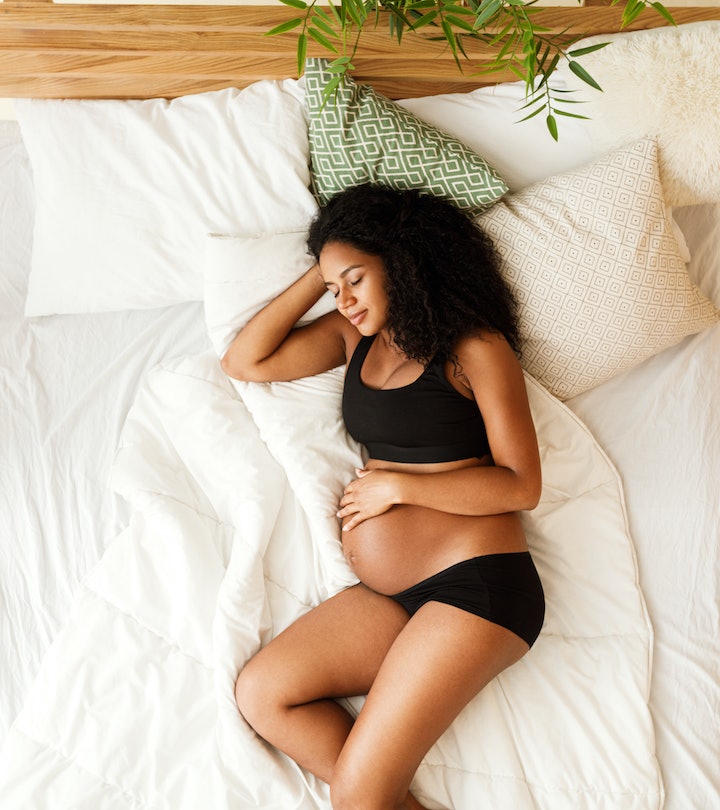 Can The Way You Sleep Really Turn A Breech Baby?

It's best to leave it to the experts.

Knock on wood, your pregnancy up until now has been pretty uneventful. Baby is on target for their fetal milestones, you’re feeling (somewhat) good, and you’re getting ready for the day when you deliver. Everything is going great, except for one thing: That little bugger is breech. That’s right, your little one isn’t facing head down, but rather butt or feet first, which means you’re ready to try everything from standing on your head to sex to flip your breech baby. But if you’ve heard that there are sleeping positions for a breech baby that can turn them head-down in preparation for labor, you might want to hold off on hitting the hay and positioning yourself a certain way until you read this.

What could cause a baby to be breech?

For a good portion of your pregnancy, your little one has totally enjoyed their womb with a view. They’ve been able to twist and turn in utero, and even do some pretty impressive somersaults, too. But by the third trimester, (when their digs get a little more cramped), your baby will not be able to flip as much and might stay in the same position. And for breech babies, that can be either with their feet or butt facing down. “There are many reasons a baby will be breech,” Dr. Shannon Schellhammer, M.D., an OB-GYN at the Orlando Health Winnie Palmer Hospital for Women & Babies tells Romper. “Most babies start out in the breech position and move to head down later in the pregnancy, so it depends on how far along you are in the pregnancy.”

But why does a baby stay stuck in the breech position while others flip? “The uterus structure itself can prevent a baby from turning to head down if there are things like a large fibroid or other anatomy changes,” Schellhammer explains. “Also, the baby itself may be the reason for not turning to head down if the baby is large or if there is a low fluid around the baby.”

As it turns out, your baby might want to turn head-down, but simply can’t. “The length of the umbilical cord can cause a baby to be breech, especially if it’s short,” Dr. Cheruba Prabakar, M.D., an OB-GYN says. “If that’s the case, the baby doesn’t have enough length to turn.”

Is it possible to turn a breech baby through sleeping positions?

Fetal positioning is so important, especially towards the end of your pregnancy. Most babies go head-down (also known as cephalic presentation) between 32-36 weeks of gestation, so if you can still (in theory) touch the top of your baby’s head by patting the beginning of your bump during this time, your baby will be considered breech. Now, is it possible to turn a breech baby if you’re sleeping on your side or back? Not really, says Schellhammer. “There is no evidence to show any sleep positions will change the baby’s position,” she says. Adds Prabakar: “There are tales about it, but nothing evidence-based that shows that sleeping positions can turn a breech baby.”

Is it recommended to attempt to turn a breech baby while sleeping?

Once you get the news that your baby is butt down (and you then share said news with people), you’re going to get a plethora of opinions on how to turn that breech baby. You might hear that walking super straight can help flip baby, but that can be a challenge when your belly is sticking way out. But it is definitely not recommended to attempt to turn a breech baby while sleeping, according to the experts. “There is an old wives’ tale that using frozen peas or another frozen vegetable on the baby’s butt or head which will possibly encourage the baby to turn away from the cold,” says Schellhammer. “But you should not try to actively turn your baby without the assistance of your healthcare provider.”

And once you’re snuggled under the covers, don’t get any crazy ideas about trying to manually manipulate Baby into doing a deep dive towards the birth canal by yourself. An external cephalic version (ECV) should only be done by your doctor, who will perform the procedure using their hands and with the assistance of an ultrasound, a PubMed study reported.

What are some safe sleep positions that could help turn the baby?

There isn’t one sleeping position that is prone to making your baby turn. The good news, though, is that 50% of breech babies will ultimately turn themselves head down by about 38 weeks, the same study found. In the meantime, you should practice safe sleeping habits, for both your benefit and Baby’s, too. “All pregnant women should sleep with a left tilt to avoid compression of the large blood vessel in the abdomen by the uterus when they are further along in pregnancy,” says Schellhammer.

If you’re concerned about your baby, you can speak with your doctor about options to turn your little one safely. In the meantime, get some sleep (while you can!) without worrying about trying to turn your breech baby, because eventually, they possibly will... all on their own.

More Like This
Here's The Best Time To Remove Your C-Section Tape
These Darling Baby Boy Names All Start With The Letter "D"
All The Reasons Why You Might Have A C-Section
Can You Help Your Baby’s Hair Grow?