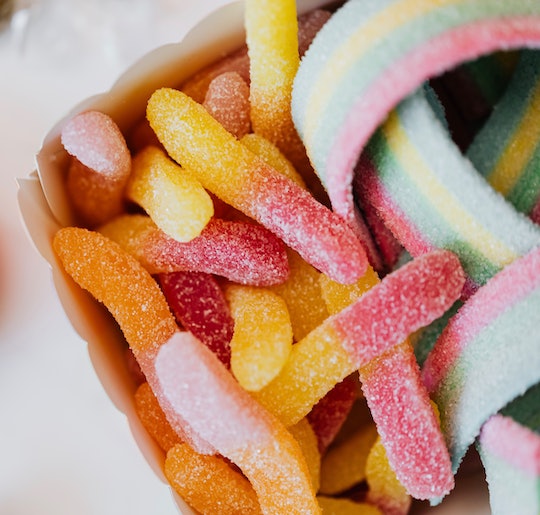 Pause before adding that bag of gummy worms to your shopping cart.

Pregnancy made me crave all the things — especially sweet things. Are you feeling stuffed from eating all the Sour Patch Kids out of your kids' stash, too? Or alternately, are you eating so many pieces of sour candy to help with morning sickness that your baby could come out with puckered lips? It's touted as a pretty good nausea cure, but is eating sour candy during pregnancy safe?

Thankfully, all candy is fair game when you’re pregnant — except for licorice. “Licorice contains a substance called glycyrrhizin that in large amounts has been found to affect the intellectual development of a growing fetus,” OB-GYN Dr. Idries Abdur-Rahman, M.D., tells Romper.

You should also be mindful of excessive intake of sugar, particularly in sodas. “A [2018] study published in the American Journal of Preventative Medicine and shared by Cleveland Clinic found a similar correlation between a mother’s high sugar intake during pregnancy and a negative impact on her child’s cognitive function in the early childhood years,” OB-GYN Dr. Barbara McLaren, M.D., tells Romper. “This study suggests that women with high-sugar diets, including those who drank a lot of soda during pregnancy, were more likely to have children with poorer cognitive skills like problem-solving and memory.”

But when it comes to sour candy, it can in fact be a good thing to eat when pregnant. “Not only is sour candy safe during pregnancy, but it can actually help to alleviate symptoms of morning sickness," says Abdur-Rahman. "Sour foods like limes, lemon, and sour candies can reduce morning sickness by increasing salivation.” And there are no known ill effects from eating sour candy (such as premature labor). “Contractions occur when specific hormones released by the brain interact with the uterus,” he notes. “Sour candy has no effect on the production of the hormones that stimulate contractions.”

Why you're craving sour candy during pregnancy

If you’re not usually the kind of person who craves the sweet puckering pain of something sour in your mouth, but you are suddenly craving it during pregnancy, that’s pretty common. There’s a lot of weird pregnancy symptoms people experience, one of the more common ones being out-of-the-ordinary food cravings. “Pregnancy is a unique and beautiful phenomenon that changes how your body functions,” explains board-certified OB-GYN Dr. Kerry-Anne Perkins, M.D. “It is common to have aversions to certain foods and a more intense liking of others.”

When you’re pregnant, secretions of a hormone called chorionic gonadotropin — which is in charge of blocking gastric acid secretions — is increased, causing a decrease in digestive enzymes. “The result of this is what we are most commonly familiar with: morning sickness,” Perkins tells Romper. “It's the nausea, dizziness, vomiting, and loss of appetite that can sometimes be debilitating.” In turn, you might begin to crave more acidic or sour things that will aid in digestion. So really, sour candy easing nausea isn’t just an added bonus of the treat — your body is actually telling you to reach for foods to fight off nausea.

Can you eat too much candy?

Can your growing baby taste the sour candy? Abdur-Rahman says that while there is evidence that babies can taste what their mothers are eating when they swallow amniotic fluid, it’s only a trace amount. “If, by chance, mom were to eat so much candy that the sour taste was concentrated in the amniotic fluid, it would not be harmful to the baby,” he says.

As far as the amount of candy of any kind that is considered safe to snack on, Abdur-Rahman says that generally, OB-GYNs recommend pregnant people eat sugar in moderation. “When enjoyed in moderation, as an occasional snack, candy is fine,” notes McLaren. “But as part of a normal healthy diet, candy doesn’t really have a place there.”

“As with macronutrients such as protein, carbohydrates, and fats, it is important that food consumption includes all food groups in moderation,” adds Perkins. “An excessive consumption of any group, including sugars, may negatively impact your body and pregnancy.”

Should you worry about gestational diabetes?

Don't panic about your sour candy love turning into gestational diabetes, either. It doesn't really work that way. “Diabetes is due to the body’s inability to properly respond to the hormone insulin, and sugar intake in no way affects this,” Abdur-Rahman says. “Eating too much sugar can, however, be dangerous if you already have diabetes or gestational diabetes. When you are diabetic, your body can’t clear sugar normally, which means it starts to build up in the bloodstream and deposit into major organs, including the placenta.”

McLaren also advises pregnant people to eat a well-balanced and healthy diet. “Candy should be consumed only as an occasional treat and should not be eaten daily or in excess amounts,” she says. “Having said that, eating candy does not directly cause gestational diabetes. It will, however, exacerbate diabetes, leading to higher sugar levels and more difficult [blood sugar] control.”

Perkins suggests that a pregnant person should always be concerned about gestational diabetes, “as it affects the health of baby and mother,” she tells Romper. “There is no way to truly prevent gestational diabetes, and eating sugar does not increase your risk. Women who are overweight and less active are at greatest risk. When you desire sweets, opting for fruits instead of candy is best.”

So, whether the sour candy is helping your morning sickness or you're just a big fan of tying sour gummy worms together and eating them like a delicacy, go forth. Just remember that everything's good in moderation.

This article was originally published on Oct. 20, 2020