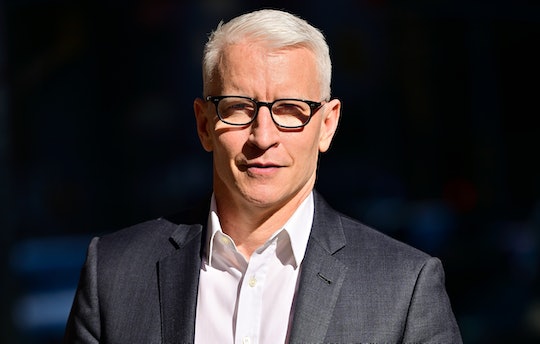 “I'm not that interested in money, but I don't intend to have some sort of pot of gold for my son.”

Anderson Cooper plans to pass on a valuable life lesson he learned from his mother onto his son. The Anderson Cooper 360° host recently revealed that while he doesn't plan to leave his 17-month-old son Wyatt Morgan an inheritance, he will do what his parents did for him.

“I don't know what I'll have,” he said on Saturday's episode of Morning Meeting podcast. “I'm not that interested in money, but I don't intend to have some sort of pot of gold for my son.”

Cooper welcomed Wyatt via surrogacy in May 2020 with his now ex-boyfriend, Benjamin Maisani. The two are reportedly still living together to co-parent little Wyatt together.

The Vanderbilt -The Rise and Fall of an American Dynasty author went on to explain his primary financial duty as a parent, which is a nugget from how his family operated with him. As he shared on the podcast, “I'll go with what my parents said … 'College will be paid for, and then you gotta get on it.”

In previous interviews, Cooper has shared that his mother, the late heiress and actress Gloria Vanderbilt, did not leave him an inheritance either. “My mom's made clear to me that there's no trust fund. There's none of that,” Cooper told Howard Stern during his Sirius XM show in 2014. “I'm doing fine on my own. I don't need any.” Cooper’s mother was the great-great-granddaughter of railroad tycoon Cornelius Vanderbilt.

But despite his wealthy lineage, the CNN journalist said he did not believe in inherited money. “I think it’s an initiative sucker, I think it’s a curse,” he shared with Stern. “Who's inherited a lot of money that has gone on to do things in their life? From the time I was growing up, if I felt like there was some pot of gold waiting for me, I don't know if I would have been so motivated.”

Cooper values making his own money, a sentiment he shares with his late mother. In a 1985 interview with The New York Times, the heiress said, “I'm not knocking inherited money, but the money I’ve made has a reality to me that inherited money doesn’t have.” Vanderbilt passed away in 2019 from stomach cancer. At the time, her net worth was $200 million, according to Town and Country magazine.

Aside from instilling early lessons about money, Cooper is a very hands-on dad with his son. He occasionally shares pictures of them together on his Instagram and, like many new parents, Cooper said that fatherhood has changed him. As he told WSJ Magazine in 2020, “My whole motivation in the morning is to be there when my son wakes up because it is the greatest moment of my day.”