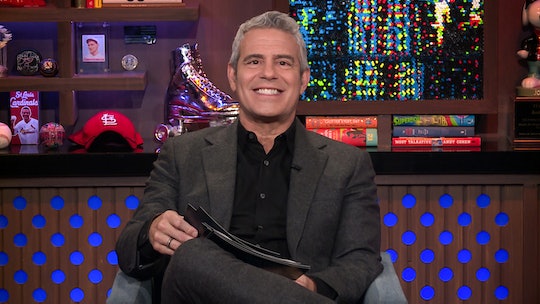 “It’s fashion with the bow.”

Is there anyone out there who is more excited about being a dad than Andy Cohen? The Bravo star’s enthusiasm over all the little moments in his day with 3-year-old son Ben and baby girl Lucy is truly infectious. Especially now that he has discovered how to do his daughter’s hair. Cohen could not be more excited about that good old teeny tiny “Pebbles”-style ponytail on top of her head.

“It’s fashion,” he pointed out in a recent video on Instagram. “With the bow.”

As a newly-minted girl dad, Cohen’s world has opened up to a whole different level of fashion with daughter Lucy. And he’s loving it. “I’m feeling really bullish about this Pebbles hairdo,” he said in an Instagram video with Lucy looking adorable in his lap modeling said hairstyle. “It’s so easy to do, and it’s fashion. With the bow.” He went on to say that Lucy’s new look was “really good,” and that he was proud of it even though “I know this is the oldest hairdo in time, but this is going to be fun doing her hair.”

It certainly helps that both of Cohen’s children have just about the most luxurious heads of hair you’ve ever seen. Just think of all those hairdo opportunities coming his way.

Ever since Cohen first introduced his daughter to the world in May, she has been having some pretty spectacular fashion moments. Like her fruit and veggie dress back in August, for example, or that bright blue barrette she wore in her hair that totally matched her eyes in September. Her older brother Benjamin has long been a fashion icon as well. Who could ever forget his extensive collection of gorgeous pajamas? If ever there was a Benjamin Cohen pajama option for adults I would give them all of my money forever.

Lucy recently went out for her very first Halloween with Cohen and big brother Benjamin. She was dressed as a little princess while both Cohen and Ben were matching skeletons. In fact, those skeleton costumes were the one time Cohen didn’t actually want to be fashionable with his kids; he was really looking for something scary for Ben and having a heck of a time of it. The only person Ben’s little lion costume scared was Lucy.

The Cohen family is going to be the one to watch for pajama inspo and bringing back retro hairdos. Mark my words.