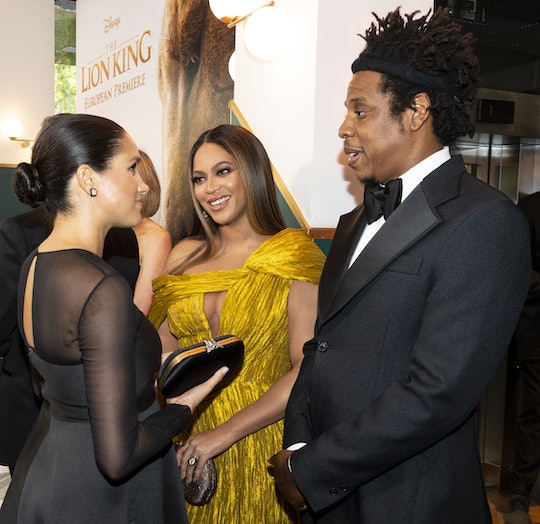 “We are all strengthened and inspired by you.”

Following her emotional and candid interview with Oprah Winfrey, Beyoncé thanked Meghan Markle for her “courage” and “leadership” after she opened up several topics, including the mental strain she suffered from the constant attacks from British tabloids after her marriage to Prince Harry and allegations of racism within the royal institution.

Beyoncé and Meghan met back in 2019 at The Lion King premiere in London, and clearly the Duchess of Sussex made a lasting impression. On her website, the Grammy award-winning singer shared a photo from that night on the red carpet, meeting and talking with Meghan, who had just given birth to her son Archie two months prior. How times have changed since that first meeting. Now Meghan and Harry are living with in Montecito, California and expecting a second child, a little girl, as they revealed to Winfrey during their CBS interview on Sunday night.

And, of course, they are no longer working members of the royal family. With the relative freedom to speak about their lives. And Beyoncé showed her support for Meghan for doing just that. “Thank you Meghan for your courage and leadership,” Queen Bey wrote in a message to Meghan on her website. “We are all strengthened and inspired by you.”

During the interview, Meghan spoke out against alleged racism within the British monarchy, telling Oprah that there had been “concerns and conversations” about the color of her child’s skin before he was born. She also spoke of her own mental health struggles and how she had suicidal thoughts during her pregnancy with Archie. “I was ashamed to say it at the time and ashamed to have to admit it to Harry,” Meghan told Winfrey. “But I knew that if I didn't say it — then I would do it. I just didn't want to be alive anymore.” As Beyoncé noted, that kind of honesty takes incredible courage.

Beyoncé thanked Meghan for her leadership and courage.

The “Lemonade” singer has expressed admiration for Meghan before. In 2019, she and her husband JAY-Z stood in front of a portrait of Meghan wearing a crown to accept their BRIT Award for Best International Group.

Queen Bey poses in front of a portrait of Meghan Markle.

Serena Williams, a close friend of Meghan’s, also applauded the Duchess of Sussex after her interview aired in a lengthy Instagram post to her “selfless friend.” Williams, who has known Meghan since 2010, wrote, “I know first hand the sexism and racism institutions and the media use to vilify women and people of color to minimize us, to break us down and demonize us. We must recognize our obligation to decry malicious, unfounded gossip and tabloid journalism."

The aftermath from Meghan and Harry’s interview has been profoundly felt. Piers Morgan walked away from his job at Good Morning Britain after facing pushback over his attacks against Meghan. The royal family released a statement about the interview, and more than 160 British journalists have spoken out about the racism in the British media since.