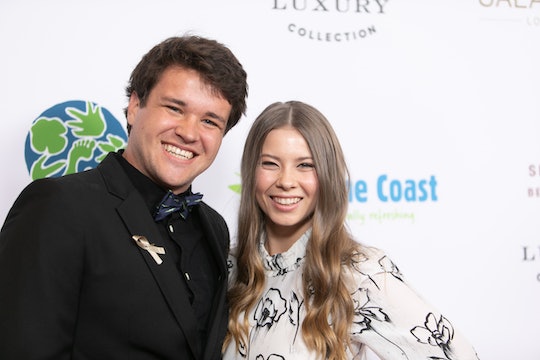 Nearly four months after announcing her pregnancy, Bindi Irwin's 26 week pregnancy bump photo is finally here, and it's so cute.

The first time mom-to-be took to her Instagram story on Tuesday where she shared a casual photo of her wearing a black turtleneck sweater, with her hands resting on her pregnancy bump. Unlike in previous updates where she updated her followers about her pregnancy symptoms and the size of her child, Irwin chose to keep things simple and let her bump speak for itself. "26 weeks tomorrow," Irwin captioned the sweet snapshot. "Oh how I love you."

Since Irwin is just around 26 weeks pregnant, she has three more months or 14 more weeks to go, according to What to Expect, and the baby is as big as a head of kale. It should be noted that Irwin is wearing maternity jeans in the photo, which she is a self admitted huge fan of. Irwin sang the praises of maternity jeans, which come equipped with a stretchy waist band that expands with her growing body, in an Instagram post made in November. "Now that I know the comforts of maternity jeans, I don't think I'll ever be able to go back," she wrote.

Not only does the Australia Zoo conservationist seem to be loving her maternity jeans, but she seems to be just enjoying her pregnancy in general. She is practically glowing in this brand new bump update and you can tell that she has so much love for her little girl on the way. It's safe to say that Irwin and her husband, Chandler Powell, are looking forward to their new arrival.

This brand new glimpse at her growing bump is super exciting, especially since it's been a while since her last pregnancy update. On Thanksgiving Day, she shared a video of her sonogram with Powell standing close by. "Beyond thankful that she chose us to be her parents," Irwin wrote in the caption of the post. "I can't wait for her to be here next year."

There are just 14 more weeks until Irwin and Powell can finally meet their little one. Her followers can only hope that she posts more bump updates until then.