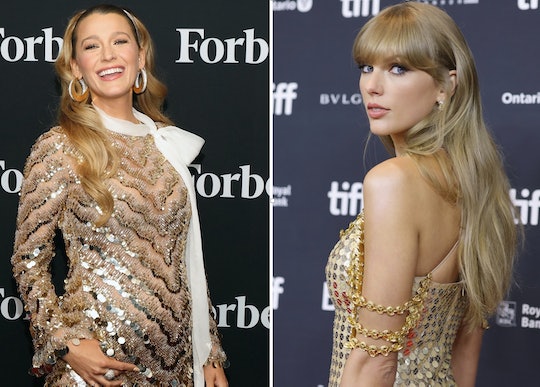 Is it a new pattern for the two pals?

Do Blake Lively’s pregnancies inspire Taylor Swift or do Taylor Swift’s albums inspire Blake Lively’s pregnancies? The two pals seem to be working in tandem with each other when it comes to babies and new music. And perhaps their worlds are all wrapped up in each other, because fans are pretty convinced that a song on Swift’s new album Midnights revealed the name of Lively and her husband Ryan Reynolds’ fourth baby. As is her tradition, of course.

Lively announced that she and Reynolds were expecting again back in September, when she arrived at the 10th annual Forbes’ Power Women’s Summit sporting a baby bump. This will be the couple’s fourth child together, making 7-year-old James, 5-year-old Inez, and 2-year-old Betty big sisters. This pregnancy also may have inspired a certain song on Swift’s new Midnights album, “You’re On Your Own, Kid,” which features a line that includes the phrase, “So long, Daisy May.”

Fans of Swift know all too well that she tends to draw deeply from her own life and the people who populate it. Which has them wondering if, perhaps, Daisy May might be the name Lively and Reynolds chose for their fourth child. Neither Lively nor Reynolds have announced whether or not their fourth baby has been born or the sex of that baby, but still fans are positive that Swift’s song is about their newest addition.

“Calling it now Blake Lively & Ryan Reynolds baby is going to be named Daisy Mae,” one fan tweeted, while another wrote, “I love coming to Twitter to confirm things like - yes other people also think Daisy May/Mae is the name of Blake Lively’s baby.”

While neither Lively nor Swift have confirmed fans’ suspicions, the singer has been known to share their daughters’ names in her music before. When Swift released her Folkore album in 2020, one of the songs was simply called “Betty.” That song also featured the names of Lively’s older daughters, and as we now know, Betty is the name of Lively’s third daughter. Swift is so close to the couple’s daughters that she thanked them in her speech at the 2021 Grammys, “I want to thank James, Inez, and Betty, and their parents, who are the second and third people that I play every new song that I write,” she said at the time.

Now she might have a fourth little girl to write for, which could mean that Lively has yet again given birth in private and allowed her pal Taylor Swift to be inspired by her baby girl. Talk about a unique way to share your baby’s name.