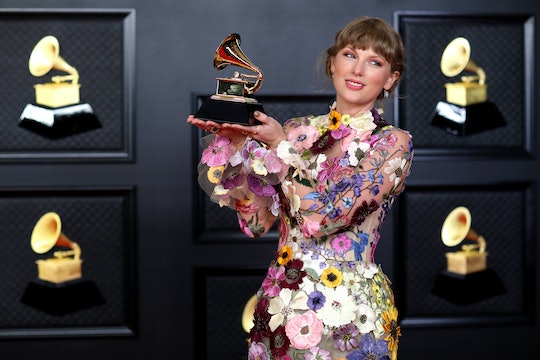 “I want to thank James, Inez, and Betty and their parents.”

While accepting the award for Album of the Year on Sunday night, Taylor Swift thanked Blake Lively’ and Ryan Reynolds’ daughters at the 2021 Grammys for allowing her to use them as her test audience and inspiration for songs.

The singer’s summer album, Folklore, was a smash hit with fans, Grammy voters, and even Lively and Reynolds’ three daughters — 6-year-old James, 4-year-old Inez, and 1-year-old Betty, who got a shoutout during Swift’s acceptance speech for Album of the Year. Swift started out by thanking her Folklore collaborators, and her boyfriend, Joe Alwyn, for being “the first person” that she plays every single song for. Then she thanked the next people she plays her songs for — the Reynolds sisters.

“I want to thank James, Inez, and Betty, and their parents, who are the second and third people that I play every new song that I write,” she said. “But mostly, we just want to thank the fans. You guys met us in this imaginary world we created and we can’t tell you how honored we are for ever by this.”

While Lively and Ryan Reynolds are very protective and private when it comes to showing photos of their kids, they have let Swift use their kids as inspiration for her music.

Their Names Are On A Song On Folklore

In the song “Betty” on the Grammy winning album Folklore, Swift uses the three girls’ names as characters for the track. “You heard the rumors from Inez/You can’t believe a word she says,” Swift sings in “Betty,” later adding, “She said ‘James, get in, let’s drive’/Those days turned into nights.”

Swift confirmed in a radio interview in 2020 that these names belonged to her “friends’ kids.”

James Has Been Featured On A Song Before

This isn’t the first time Reynolds and Lively’s oldest daughter has been featured in a Swift song. James can be heard cooing in the intro of Swift’s song “Gorgeous” from her 2017 album, Reputation. “That was a voice memo that ended up on a song,” Reynolds explained during a Good Morning America in 2018. “My daughter has a terrible ego problem after that.”

And it’s safe to say that Reynolds and Lively are fans of the song, too. Fans captured the proud parents freaking out after hearing the introduction while attending a Reputation tour stop in that same year. “That was the true, unfiltered version of our terrible stage parent pride,” Lively explained during an interview with Good Morning America that September. “Our kids have very normal lives, as much as that’s possible. So she didn’t even get a title on the album. I should be collecting royalties!”

Swift and Lively are very good friends, whose friendship can be traced back to 2015, according to E! News. The Gossip Girl alum has even said that the world “needs more Taylor.”