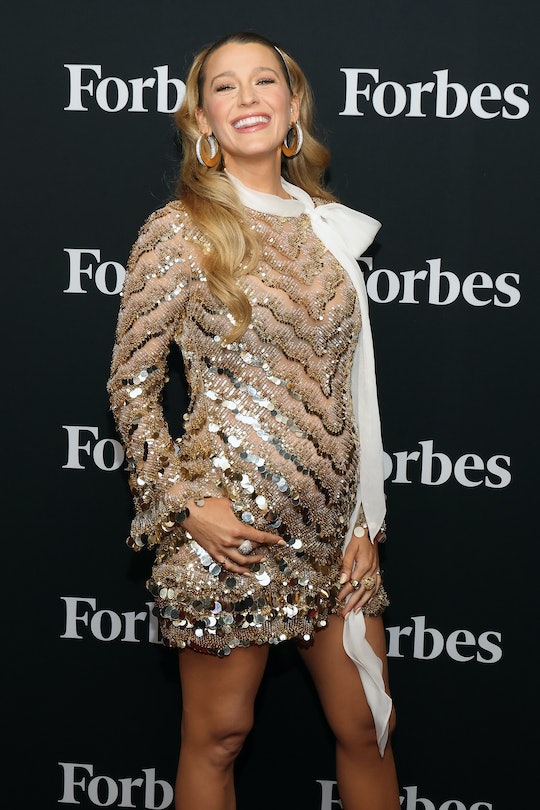 Every baby bump needs some sequins!

Blake Lively and Ryan Reynolds are adding another mini-me to their sweet family. The 35-year-old actress didn’t so much as announce that she’s pregnant with the couple’s fourth child as “wear it” when she stepped out for the 10th Annual Forbes Power Women's Summit with her bump on full display. No official statement on behalf of the genetically blessed couple is needed (or was given) to wish these two lovebirds congrats on being pregnant with Baby #4.

Lively already shares three adorable daughters with Reynolds: James, 7, Inez, 5, and Betty, 2. The A Simple Favor star was shining from the inside out in a sparkly long-sleeved sequin mini dress that perfectly accentuated her growing bump. The Betty Buzz drinks mixing mogul also paired her ensemble with chic accessories, including a satin headband and big hoops.

Now can we please talk about those gorgeous sky-high white platform shoes!? It is unclear how any human, no less a pregnant one, is able to balance oneself on such towering heels! But this stylish look should probably come as no surprise since the Gossip Girl alum has a history of slaying maternity fashion.

This also isn’t the first time the entrepreneur, actor, and director has shared her pregnancy status on the red carpet. When Lively was carrying her third child, she made the joyful reveal on the red carpet at the premiere of Reynolds’ movie, Detective Pikachu.

While the world is no doubt overjoyed that there will be more Reynolds running around, some might be confused to hear the announcement of this family’s expansion. Sure, Reynolds is a devoted dad of daughters, but he’s also made it no secret that he can get a bit overwhelmed by parenthood. The Deadpool star joked that his kids are sometimes so wild he thinks they might have rabies. He also dropped some hints that he might be done with dad-ing when he created a funny commercial for his tequila line, (alongside Nick Cannon) that basically promoted vasectomies.

Whether or not Reynolds is ready for another one, at least there is one thing that will remain unchanged: Lively will look fabulous and inspire some serious shoe envy throughout each and every trimester.