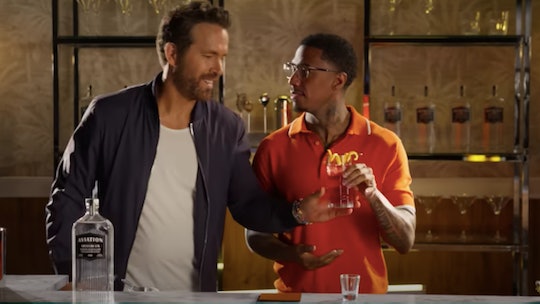 “Lord knows I need one.”

Some parents celebrate Father’s Day spending quality time with their kids, and other dads (ahem, Ryan Reynolds) honor this special day with an homage to alcohol and surgical male birth control. In what’s becoming a hilarious Father’s Day tradition, Reynolds released his second Father’s Day commercial for his gin company, Aviation, offering up his signature recipe for a contraception-themed cocktail. In the clever new ad, Reynolds enlisted the help of fellow celeb dad, Nick Cannon, to mix a cocktail called The Vasectomy.

“Congrats to @nickcannon! Also apologies to @nickcannon,” Reynolds wrote to the father of eight on Instagram. “While delicious, the Aviation Vasectomy is clearly not yet 100% effective. #HappyFathersDay.”

The video opened with a bespectacled Cannon in front of a bar. “It's almost Father's Day, and the one and only Ryan Reynolds asked me to help us all celebrate with the mother of all cocktails: The Vasectomy,” said The Masked Singer host. “Lord knows I need one.”

Cannon continued to crack sarcastic jokes about parenthood while displaying some purposely clumsy bartending skills. “First, fill a tall glass of ice,” he said. “The way children fill our lives with so much joy.”

“Pour in three ounces of tonic. So bubbly,” Cannon continued. “Just like I feel everyday I wake up after a long full night’s sleep.”

After he finished whipping up the drink, Reynolds hopped on screen for a fun cameo. “I'll take it from here, Nick. I have three kids,” Reynolds said and then took a sip. But when Cannon mentions that he has eight children, the Deadpool star dramatically spat out his drink.

In a show of dad-bonding solidarity Reynolds and Cannon hugged it out. “No wonder you have eight kids,” Reynolds gushed. “You smell amazing.”

The celebrity dad bromance lingered online as Cannon also posted the hysterical spot to his Instagram, with his new bestie dropping some hearts in the comments. “I’m making mine a double. ❤️❤️❤️,” Reynolds wrote.

Cannon revealed on The Nick Cannon Show that he is indeed expecting his eighth child, a baby boy with model Bre Tiesi. And more kids might be on the way for The Masked Singer host. When Cannon recently appeared on Angela Yee’s Lip Service podcast, he not only copped to breaking his vow of celibacy, but teased that “the stork is on the way.”

Cannon shares his oldest children, 11-year-old twins Moroccan and Monroe with his ex-wife and pop superstar, Mariah Carey. He is the father to another set of twins, Zion Mixolydian and Zillion Heir with Abby De La Rosa. Cannon also parents daughter, Powerful Queen and 5-year-old Golden with model and Miss Universe Guam, Brittany Bell. Sadly, Cannon recently experienced the loss of his 5-month-old son Zen, who he welcomed with Alyssa Scott and tragically died of brain tumor.

While the Aviation ad utilized Cannon’s natural comedic ability, the proud father is no joke about being present in his kids’ lives. In a recent interview with Men’s Health, Cannon spoke about being an active father. “Contrary to popular belief, I’m probably engaged throughout my children’s day, more often than the average adult can be...I’m involved in everything from coaching to having guitar lessons with my daughter every week.”

Reynolds also knows a thing or two about daughters, as he shares three of them with wife and actor Blake Lively. Ever the inclusive gin-pusher, Reynolds also recently starred in a super funny commercial starring his own mother, who helped him concoct a drink called The Mother’s Ruin Punch (while she nagged him incessantly and tsk-tsk-ed his lack of coasters).

Since Lively has followed Reynold’s lead and also ventured into the drinks industry, we’re hoping she might engage in a little healthy battle with her husband and step up her game with some competitive Mom Humor. Your move, Blake.