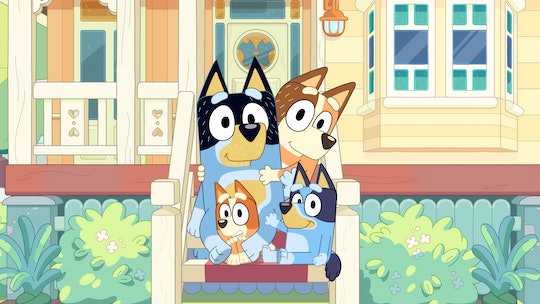 All the way from Australia, Bluey is making her debut in New York City this Thanksgiving!

This year’s Macy’s Thanksgiving Parade will have a new addition for little ones to enjoy. Bluey from the hit children’s TV series Bluey will make her giant debut as one of the character balloons for the famous holiday parade.

The massive balloon will measure 51 feet long, 37 feet wide, and 52 feet tall. Approximately 50 gallons of blue paint were hand-painted by the team to bring Bluey to a larger-than-life form, as if the toys are not enough!

“As one of the most popular characters in children’s entertainment today, we could not be more excited to welcome Bluey, all the way from Australia, to the 96th Macy’s Parade line-up,” Jordan Dabby, a producer of Macy’s Thanksgiving Day Parade, said in a statement. “Millions of families will be thrilled to see Bluey celebrate her first New York Thanksgiving as she soars above the streets of Manhattan on Parade Day.”

Rebecca Glashow, chief executive officer of global distribution for BBC Studios added that being part of the Macy’s Thanksgiving Day Parade is a true highlight for Bluey. “This iconic event has long been an important part of the holiday season for kids and families across the U.S,” said Glashow. “We couldn’t be more excited that Bluey will be there to join this year’s celebration in New York City.”

The Australian television series follows the adventures of the blue puppy who lives with her dad Bandit, her mom Chili, and her little sister, Bingo. The Emmy-winning series is streaming on Disney+ and airs on Disney Junior and Disney Channel.

The show is watched in more than 60 countries now. “To be honest, I just write them to make me laugh, and what I think will make kids laugh.,” Bluey show creator Joe Brumm told TBI earlier this year. “And for the most part it does. I think you laugh a lot when you’ve got a kid; there’s a lot of shared laughter in my house, so it just seemed natural to try to capture that in the show.”

November will be a big month for Bluey. Bluey’s Big Play The Stage Show, the first live show and theater adaptation based on the series will debut on Nov. 19 at Hulu Theater at Madison Square Garden and tour across the country.

The Bluey balloon will make its debut at the Macy’s parade on Thursday, Nov. 24 starting at 9 a.m. If you’re not in New York City, you can watch the parade on NBC and Peacock. Fans can also follow Bluey that day on social media using the hashtags #BlueyBalloon and #MacysParade.

In addition to Bluey, families can look forward to seeing other beloved character balloons from popular kids shows like Ada Twist, Scientist, PAW Patrol’s Chase, and of course, Snoopy.