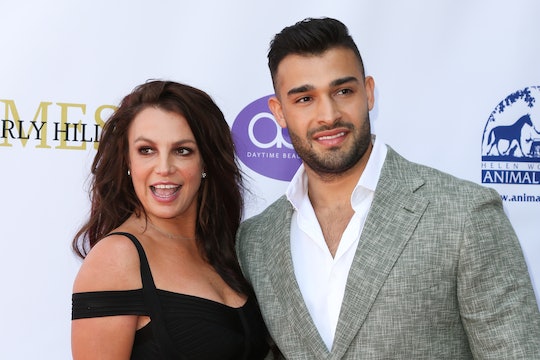 Moments after Britney Spears surprised the world with her pregnancy announcement on Monday, the pop star’s fiancé Sam Asghari also shared an Instagram post that had fans feeling a bit emotional and excited for the couple. Asghari, who has been with Spears since the two met on the set of her “Slumber Party” music video in 2016, shared how much he’s “always looked forward” to becoming a dad.

The “Toxic” singer revealed in a jubilant Instagram post on April 11 that she is pregnant with her third child, and her first with Asghari. Spears, who shares 16-year-old son Sean Preston and 15-year-old Jayden James with ex-husband Kevin Federline, explained, “I lost so much weight to go on my Maui trip only to gain it back… I thought ‘Geez … what happened to my stomach??? ‘My husband said ‘No you’re food pregnant silly!!!’ So I got a pregnancy test … and uhhhhh well … I am having a baby.”

Asghari — who could well have married Spears in recent months judging from her post that referred to him as her “husband” —  shared his own post on Monday featuring a painting of two lions and a lion cub with a touching message.

“Marriage and kids are a natural part of a strong relationship filled with love and respect,” he wrote. “Fatherhood is something i have always looked forward to and i don’t take lightly. It is the most important job i will ever do.”

Whether or not Asghari is Spears’ “husband,” as she wrote on Instagram, the pair are certainly excited for this next stage of their lives. Particularly coming as it does after a 13-year-long conservatorship, in which Spears testified that she was not allowed to remove her IUD, was finally terminated in November 2021.

Fans of the couple were quick to share their congratulations on Asghari’s Instagram post. One fan commented, “Congrats! Whatever she wants…the answer is yes. Hot sauce at 3 am…yes. Ice cream for supper…yes. Continue to treat her like the queen she is…” One more wrote, “The whole world is excited about it guys.”

Spears has made her love for her longtime boyfriend and her hope to someday have a baby with him clear in recent months, both on social media and in court. Last week she took several photos of Asghari and shared them on Instagram alongside the message, “Acceptance and freedom are my key factors in my life at the moment and also loving this yummy man who I love so much!!!” And she testified in June 2021 that one of the reasons she wanted to end her conservatorship was simply to go for a ride in a car with her boyfriend and eventually have a baby with him. It turns out both of those things are coming true.