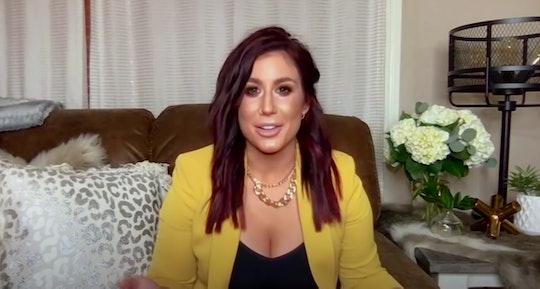 "Our bodies are pretty fricken amazing."

Roughly one month after giving birth to her fourth child, Chelsea Houska is documenting her postpartum journey and not just for herself. The new mom is also sharing photos of her personal process on social media along with some inspiring messages to fellow moms.

"Three weeks postpartum," the former Teen Mom 2 star captioned a full body mirror selfie that she posted to her Instagram Story on Wednesday. "Trying to embrace and document the process. Our bodies are pretty fricken amazing."

After giving birth to Layne in 2018, Houska opened up about her struggles with postpartum anxiety and leaving her kids with her family. And two months after giving birth to Layne, Houska took to Twitter to marvel over how post-pregnancy weight loss isn't the same for all moms. "I feel like the people who lose all their baby weight right away JUST from breastfeeding are magical unicorns," she tweeted in October 2018.

Now, a little more than two years later, Houska is once again acknowledging that every mom's postpartum journeys are unique. "Everyone is different," Houska captioned her Instagram post on Wednesday, wearing an outfit comprised of black leggings and cropped black tank top. "Do NOT compare your postpartum body and journey to someone else's."

Houska shared that she is embracing a casual and comfortable style in the weeks after giving birth to her fourth child. "High waisted leggings are my BFF," she wrote in a second post on her Instagram Story.

This isn't the first time that she has been open about what her postpartum life looks like since giving birth to Walker. Just five days after welcoming her, Houska took to her Instagram Story where she shared a mirror selfie in black leggings and a hoodie. "Still rocking a tummy that looks a bit pregnant and some huge milk boobs," she captioned the photo at the time, according to Us Weekly. "Also, let's keep it real real. The belly's still chilling."

While Houska's experiences with motherhood were previously documented for MTV cameras, she announced last year that Teen Mom 2 Season 10 would be her last and that she would be leaving the show. But don't worry, it doesn't seem like she's disappearing and will continue rocking some comfortable leggings.