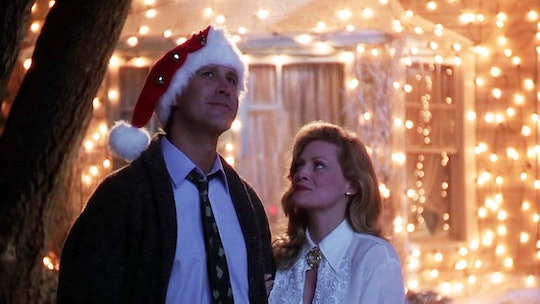 Clark and Ellen Griswold are honorary parents to us all, and as such it is important that we know they still love each other. Or at least are willing to hang out together. To our eternal relief, this does seem to be the case because Chevy Chase and Beverly D’Angelo recently got together for a little Christmas Vacation reunion complete with Christmas sweaters and everything. So we can all rest easy knowing that Ellen and Clark live on, at least at the Steel City Comic Con where they spent the weekend.

D’Angelo took to Instagram to share some behind-the-scenes photos of her time with former Vacation franchise husband Chevy Chase at the Steel City Comic Con just north of Pittsburgh over the weekend. The pair starred together as Clark and Ellen Griswold in not just one but four National Lampoon's Vacation movies, never wavering in their love for each other despite the fact that their children, Rusty and Audrey, were completely different people in every single film. While all of the movies were popular, none have stood the test of time quite like Christmas Vacation. And so Chase and D’Angelo slipped into cozy Christmas sweaters and hung out together for a little holiday reunion.

“Together again...” D’Angelo, who is coincidentally starring in a new holiday movie called Violent Night alongside David Harbour, wrote on Instagram. And fans could not have been happier to see it.

The pair were later joined by another former Vacation co-star, Christie Brinkley, who famously played “girl in the red Ferrari” in the original movie. Brinkley might not have been in Christmas Vacation but she dressed the part in a holiday sweater, which was clearly met by approval from the Christmas-loving Griswolds.

As for the Griswolds themselves, it seems D’Angelo and Chase have cultivated a friendship that has withstood the test of time for decades. “We became friends on the first one, and we’ve maintained that friendship. We’ve worked together so many times,” D’Angelo told The Current in 2020. “I mean, our paths have crossed professionally forever, but it’s because at the foundation we’re friends," she added. "I always said it was the chemistry between me and Chevy that created Ellen and Clark, as much as the words that we had to say.”

For her part, D’Angelo also admitted to The Current that she always saw the 1989 classic film as a “romantic comedy” because of how much Ellen loved her husband. So it’s comforting to know that, all these years later, they are still going strong.

More Like This
25 Sweet Movies Families Can Watch Together On Valentine’s Day
The Best Valentine’s Day TV Episodes For Kids
Marcel The Shell Is Heading To The Oscars!
Pixar’s 'Turning Red' Is Nominated For An Oscar — Here’s How To Watch It Right Now
What Parents Are Talking About — Delivered Straight To Your Inbox