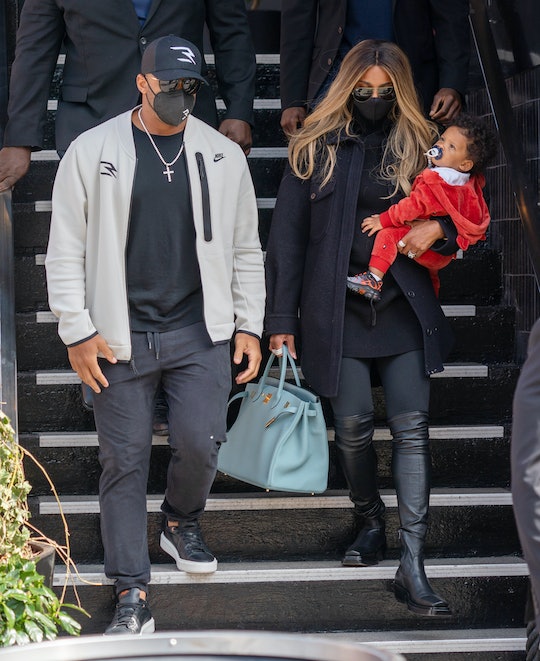 The youngest Wilson has leveled up to walking!

It’s official: Win Harrison Wilson is walking now! The youngest son of Ciara and Russell Wilson took his first steps and, of course, it happened on a football field. The 12-month-old was visiting the Seattle Seahawks quarterback at his training camp recently when he did a little 1,2 step right on Lumen Field.

“Win’s first steps!” the proud dad captioned a photo of the precious moment on Instagram on Aug. 5. “Witnessing Win walk on the practice field for the first time.. it hit me that God orders our steps.” The NFL player added the following Biblical scripture: “In their hearts, humans plan their course, but the Lord establishes their steps.”‭‭Proverbs‬ ‭16:9‬ ‭NIV‬‬.”

“So many times in life I would always want to control & decide what is best or what I should do,” Wilson continued. “Going into year 10 & watching my kids grow has given me such a perspective in life of a ‘Rookie.’ Knowing that in the Game of Life that Jesus is the Quarterback. I thank You Jesus for allowing me to Let Go & Let God! I praise You!!!”

Win’s first steps came shortly after the little boy celebrated his first birthday on July 23. The “Level Up” had previously opened up about she was pretty “achy” and dealing with morning sickness during her pregnancy with Win, but they’ve shared many joyful moments since his arrival last year. Like when he said “mama” for the first time and, of course, his first steps.

There were some hints that Win would be on his own two feet soon enough. On July 24, Ciara posted an Instagram video of Win on his birthday standing up for several seconds before dropping to the floor and crawling towards the camera. “The Big 1!” she captioned the video. “Waiting for that 1st step like.”

Needless to say, Win may be ready for his mom to teach him the choreography to her “1, 2 Step” music video any day now.