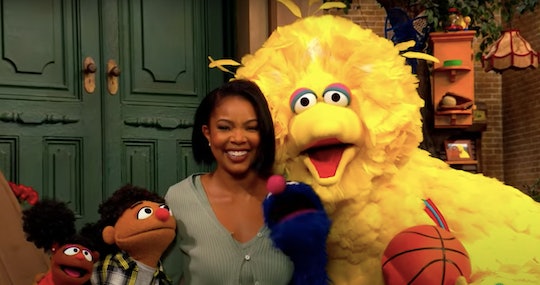 And she got to meet Elmo’s puppy Tango!

Sure, the glitzy award ceremonies and magazine covers are swell, but when you finally get invited to appear on Sesame Street, that’s when a celebrity knows they’ve really made it. Gabrielle Union can now check this prestigious goal off her bucket list, as she recently dropped by the set of Sesame Street and taught her new pal, the “cute and lovable” Grover, the highly-anticipated “Word of the Day.”

In a video shared on Sesame Street’s YouTube channel, Union explained the concept of unity to the pretty clueless blue monster. After her mini-lesson on prefixes, she gathered with a crew of some of Sesame Street’s favorite characters to provide a visual example of togetherness. Contrary to Grover’s deliciously misguided expectations, she drew in the crew of characters for a pretty sweet group hug (not a cheeseburger. Sorry, Grover!).

Union, who is married to and raising a blended family with former NBA player, Dwyane Wade, is likely very well versed in all things Sesame Street, as a mom to 3-year-old daughter, Kaavia James. The couple are also parents to three other children and have become role models for families everywhere, especially as allies to the LGBTQ+ community.

Union, who was clearly on a high from her guest spot on Sesame Street, shared some sweet photos from her day on set. In a photo shared on Instagram, a beaming Union posed right in front of that famous stoop surrounded by Bird Bird and Grover. In the another, Union shared a snuggle with Elmo and his puppy, Tango.

“Unity is … #ComingTogether with my furry friends on @SesameStreet to share the word of the day!” she captioned the post.

Of course, the one question that remains: will Kaavia James be impressed?

Kaavia, who is already Instagram-famous as a mere toddler, has stolen the spotlight from her parents, countless times with her feisty personality and over-the top cuteness. Notorious for being the “shadiest” baby, Kaavia has been known to put her mom in her place or assert herself as the real boss in the family. Best believe, she will let you know when your breath reeks or when you need to pull it together and quit crying.

As the daughter of a famous couple, no doubt Kaavia James has met her fair share of celebrities, but in the eyes of a toddler, there’s probably no one bigger than Elmo. So here’s hoping that Union’s stop on Sesame Street not only got her props from her super famous friends, but from her very particular daughter, too.