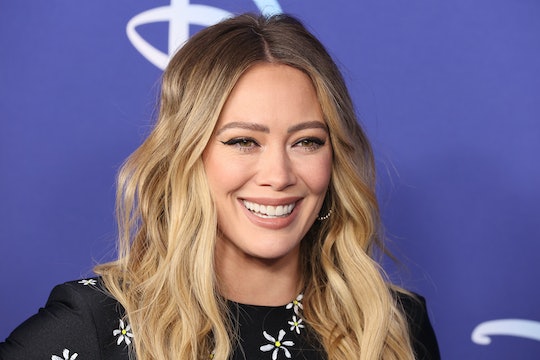 Hilary Duff's Daughter Mae Is Every Toddler Obsessed With CoComelon

Does this mean Hilary has the “Yes, Yes Vegetables Song” stuck in her head, too?

Wake up. Eat something. Watch CoComelon. Take a nap. Repeat. Welcome to the good life in toddlerworld (and, OK, adults probably wouldn’t mind this schedule either). If your toddler is obsessed with CoComelon, then you’re in good company. Hilary Duff’s 18-month-old daughter Mae is also a huge fan of the preschool series, too! Yesterday, the How I Met Your Father star shared an inside peek into Mae’s weekend, and it included her well-loved JJ doll in several of the snaps.

“A weekend in Mae’s life,” Duff captioned the post on Instagram. Her weekend included plenty of love for her siblings, for dressing up, and, of course, for CoComelon.

In the first picture, Mae is cuddling on the couch with her older sister Banks, 3, whom Duff shares with husband Matthew Koma. They are cuddled up under a blanket on the couch, with the toddler lying on her sister’s back. In the next photo, Mae looks adorable in a big hat fastened under her chin. It’s CoComelon’s pink-and-green melon logo! But the little girl’s love of the hit Moonbug Entertainment series doesn’t end there. In snap three, she’s riding on a little toy with a JJ doll as her first passenger. Her doll is turned around facing her as she holds his hand in the most precious moment.

There’s another shot of Mae with a just-woke-up expression on her face. Her hair is messed up as she stares off to the side in a daze, clutching a teddy bear in one hand and her trusted JJ doll in the other. Her adoration for the bald-head toddler from the show is so stinkin’ cute!

CoComelon, now available on multiple streaming platforms, has over 139 billion views on YouTube, so it’s no surprise that Mae has seen it. Maybe Duff will also take her to see the upcoming CoComelon Live tour?

Mae’s weekend wasn’t just about CoComelon, though. She also likes playing outside with toy cars, as evidenced in a photo of Mae wearing a pink tank top and ice-cream print leggings, with her hair neatly tied up in a pink scrunchie. She’s a fashion icon already!

Other pictures in the carousel include Mae playing with a backyard water fountain, Mae smiling and showing off her coffee-print jammies and “Mae” necklace, and Mae wearing a sparkly pink cape. In one shot, she is wearing the cape behind Banks, who has on a black star-print cape and is mixing something that suspiciously looks like hot chocolate and marshmallows in a bowl on the floor. Mae has a bit of a deer-in-the-headlights expression, like her mama caught her getting in trouble, even though Banks is the one with the mixing bowl. Ah, the life with little kids.

There’s even one photo of Mae with both of her older siblings, including Duff’s son Luca, 10, with ex Mike Comrie. They are adorably stacked on top of each other on the couch and all seem to genuinely enjoy each other in a moment that deserves to be framed.

Mae is just like every toddler: carrying her favorite CoComelon toy everywhere, playing dress-up for days, and admiring her older siblings with a love so sweet. She’s adorable (even if she does unleash a wild scream on airplanes).

More Like This
Hilary Duff Cut Her Daughter Mae’s Hair & Gave Her The Most Adorable Bangs
Rubble From 'PAW Patrol' Is Getting His Own Spinoff Series Full Of "Messy Demolition"
New Blippi Live Show Is Coming To A Stage Near You In 2023!
Hilaria Baldwin Posted An "Epic Fail Family Photo" With Her 7 Kids & Husband Alec