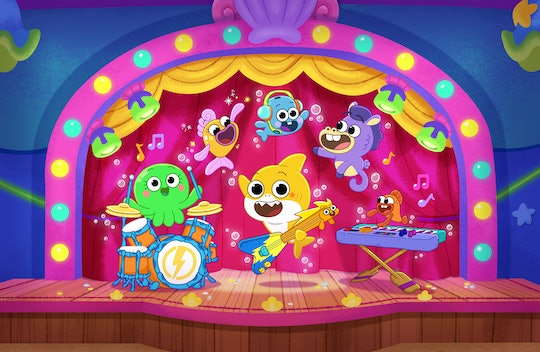 Everything You Need To Know About Baby Shark's Big Show! On Nickelodeon

That's right, Baby Shark is getting a TV series.

If you thought the Baby Shark craze had somehow passed along with making foam coffee and baking loaves of banana bread, you were mistaken. This month, your little ones will certainly want to watch Baby Shark's Big Show! , a new animated series coming to Nickelodeon featuring the whole family of sharks.

Baby Shark and his famous Shark family from the wildly viral YouTube video will be singing and swimming across your TV screen soon. Nickelodeon is expanding the world in a brand new animated series geared towards preschoolers with an impressive voice cast. After initially making his big TV debut during a holiday-themed special in December, Baby Shark is here to stay on Nickelodeon. So here is everything you need to know before Baby Shark's Big Show! premieres.

Baby Shark's Big Show! will premiere on Nickelodeon on Friday, March 26, at 12:30 p.m. EST. In the premiere episode, Baby Shark gets his first loose tooth and enlists his friend's help to lose it so he can trade it in for a sand dollar. But when his antics get his tooth lost for real, they must team up with the toothfish fairy to track it down. Following the premiere, it will be available to watch on Nick Jr. On Demand, as well as NickJr.com and the Nick Jr. app, which will include short-form content from the series.

When Will New Episodes Will Air?

New episodes of Baby Shark's Big Show! will air on Nickelodeon's preschool platforms beginning on March 26. There will be 26 half-hour long episodes that will air in the first season, and will air regularly on Fridays at 12:30 p.m. on Nickelodeon.

What Is Baby Shark's Big Show! About?

The animated 2d series will follow Baby Shark and his best friend, William, as they explore their home of Carnivore Cove, make new friends, and sing songs along the way.

Who's Voicing Baby Shark & The Other Characters?

Actor Kimiko Glenn, who has starred in Orange Is The New Black, will lend her voice to Baby Shark. Luke Youngblood, who played Lee Jordan in Harry Potter & the Sorcerer's Stone will take on the role of William, Baby Shark's hilarious and "quick-witted" fish friend who is always down for an adventure. According to a press release from Nickelodeon, here are more friendly faces you can expect to see in Carnivore Cove:

And just in case you needed a little more Baby Shark in your life before Nickelodeon's animated series premieres, please enjoy the very catchy hand-washing song with lyrics like "Let's doo doo doo doo it together with Baby Shark and Shark Family!" You're welcome.

This article was originally published on November 18, 2020