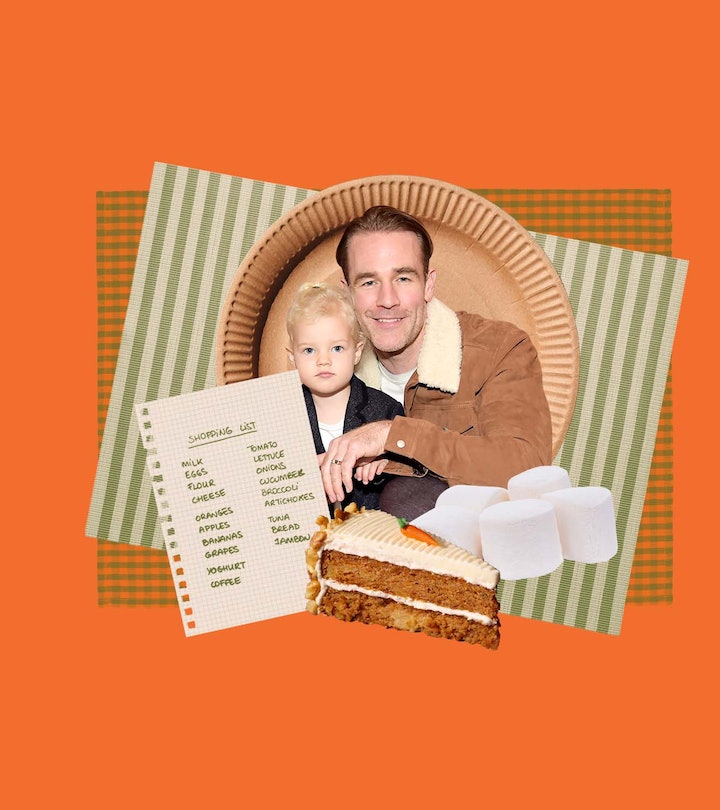 James Van Der Beek, Dad Of Six, Gets Emotional Over A Solo Meal

“If I just had to make dinner for myself, honestly, I'm getting emotional just thinking about it.”

Sure, James Van Der Beek is known by adoring fans for his teen heartthrob days on The Creek, starring as the chatty-yet-sensitive high schooler in an iconic teen drama. But honestly, we’ve so moved passed that, and so has Van Der Beek. These days, the accomplished actor and father of six has paddled far beyond Dawson’s Creek. He’s cha-cha-ed his butt off on Dancing With the Stars, tackled the role of real-life hotshot DJ Diplo, and even lent his voice to Vampirina, one of your kid’s favorite bloodsucking shows.

But there’s another space where Van Der Beek is absolutely crushing it, and that’s on social media. The Pose star and recipient of the illustrious “Van Der Beard” Best Dad Beard Award has been quietly putting out some of the best parenting content your fingers could ever hope to scroll across. From color-coded dad hacks to epic pink manicures seshes with his daughter, Van Der Beek has shared his joyful, practical, and (dare I say it) soulful take on being a modern dad who also moved his family to a spot so off the beaten path, they can’t even get pizza delivered there.

Turns out, not only is Van Der Beek an awesome father to 11-year-old Olivia, 10-year-old Joshua, 8-year-old Annabel, 6-year-old Emilia, 4-year-old Gwendolyn, and 1-year-old baby Jeremiah, he’s s stellar husband too. He does his fair share of household chores and has been a bright beacon of strength and vulnerability by sharing his family’s painful pregnancy losses. So as an A+ partner with such a thoughtful online presence, it should come as no shock that Van Der Beek is a do-gooder too. This past Thanksgiving, the Varsity Blues star partnered with Libby’s Vegetables to donate to Meals on Wheels and support hunger relief for seniors this holiday season. He also shared his tasty recipe for a decadent green bean casserole.

For our Family Dinner series, we talked to Van Der Beek in his rugged plaid shirt against a backdrop of an eye-popping blue sky. He opened up about cooking in a bustling home with a half-dozen kids, how his wife inspired him in the kitchen, and his carnivorous palate (that seems pretty legit for a Texas transplant). Trust us, you’ve never heard anyone talk about steak in a more romantic way.

You shared a hilarious video on Instagram where you’re in the car with your family and your wife Kimberly is trying to convince you to eat carrot cake. You make the bold culinary claim that: “carrot cake devotees are some of the most insufferable people ever.” You also mention the cake was a famous family recipe, so I'd love to hear what was food like in your home growing up?

My grandmother did have her special carrot cake which everybody loved. So there were a couple of amazing recipes passed down. But, I'll be honest — food was really utilitarian in my house growing up. It was like, “Get food on the table, and get the kids fed, and get us off to football.” Or wherever we were going. So I remember it being very practical. There wasn't too much ritual around dinner in our house.

How did you learn to cook?

I learned to cook when I met my wife. I was a bachelor, and I recognized really quickly this woman is not going to mess around with somebody who doesn't know how to cook. So I better figure this out.

So you did it for love?

I absolutely did it for love. So I started by mixing some of the pre-made foods that I'd find in the grocery store with the pre-made meatballs. Because recipes were always really intimidating, because there were so many ingredients, and I'm dyslexic, so measurements and all that were just a headache. But once I got a couple footholds I was then able to start experimenting. I make my own steak seasoning now.

So what are things like now, fixing dinner in your huge household? What's the division of labor like when it comes to family meals?

Depends how much sleep everybody's had. I do end up cooking and cleaning a lot, especially because my wife is with the baby. So that is her full-time job, in addition to all the other things that she's starting, and entrepreneurial endeavors that she's starting as well. So the kids will help me prep sometimes, if I can figure out how to ask them in the right way, they'll help me empty the dishwasher. They're better at emptying it than they are filling it. So that's one thing.

But it ends up, whenever you can find a kid who's willing to help. If they're much more invested in the meal, they're much more likely to eat it. And I just think it's really good to teach those building blocks, and measurements. And fractions.

There you go: math.

And all the other lessons. The bonding that you can cram into something that you have to do anyway. But I really do enjoy it, I do enjoy cooking. I love having friends over and cooking, and having friends in the kitchen while I'm doing it, and preparing a meal. I love shopping for food, and, “Oh, they have lobster here today. That's what we're doing. We're doing lobster tails tonight.” I love that presentation for friends and family. So on a good night it matches the Instagram.

Are any of your kids picky eaters? With so many little ones, you've got to have one in the bunch.

About three kids ago, [we] stopped making individual plates. So we make the food, put it in serving dishes on the counter, and then we hand the kid an empty plate, and so it's up to them to decide what they want, and how much. We really just lost the capacity to keep track of what they were eating.

There are certain ones that don't like certain dishes, and then something that everybody seems to like one will say, “I really don't like that.” It's like, “Oh, man.” And if they say it twice, then you know they mean it. So you have to respect that. So you just keep experimenting, and you keep trying, because we live outside of food delivery zones here.

Interesting! So if the kids were in charge, what would be on the menu?

That works! And how about you? I'm not sure this is a possibility in your life, but if you were alone in the house for dinner what would your solo meal be?

Oh, my own tears if I were alone. I wouldn't know what to do alone. And if I just had to make dinner for myself, honestly, I'm getting emotional just thinking about it.

Alone time as a parent is the dream.

It's the dream, and it's also the nightmare. I don't think I know how to make any dishes just for one. I would have to really put some time thinking what I would actually [cook]. I would probably make some venison. From a farm not far from here called Force of Nature, they have this regenerative farm. So I would probably use my steak seasoning on the venison, and I would cook that over wood fire. With a glass of wine.

Do you have any strategies for leftovers? Do leftovers even exist in your house?

There are definitely leftovers, and they get used. I mean, strategy is: serve it in the glass Tupperware. So put it on the plate, and don't be fancy about a serving dish. That's our hack. So that when it's done, all you have to do is put the top on it, and it goes right into the refrigerator.

Awesome. So I know you moved to from California to Texas in 2020 and have recently enjoyed road-tripping with your family. I just saw an interview with your pal Alfonso Ribeiro and he said that you, he, and Mark-Paul Gosselaar have matching RVs.

Yes, so he and Mark-Paul got one the year before I did. And they got identical RVs inside, outside, and they go big RV-ing together. And if they’re not careful, they'll just walk into the other ones, because it's identical.

Amazing. So indulge my ‘90s fantasy here. In my dreams, there's a reality show that follows the three dads and their families in their RVs that also features competitive cooking. So if you had to challenge your friends Ribeiro and Gosselaar to an RV Trip Dad Cook-Off, what would your dish be?

Oh, I would go steak. That's my home run swing. I would get the wood, I would get some oak from some fallen oaks here on the land. I would use my own seasoning, and I would do it over fire. I'd get it down to the embers.

And you're pretty confident you would win this fictitious cooking competition?

Because it's fictitious — I'll guarantee it.