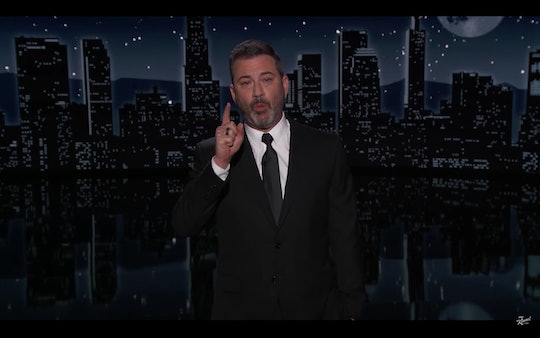 Father, comedian, and late night talk show host Jimmy Kimmel broke down in a tearful monologue discussing the recent mass shooting at Robb Elementary School in Uvalde Texas, which tragically took the lives of 19 innocent children and two heroic teachers. Kimmel, who has four children of his own, was visibly shaken as he appeared without a studio audience and spoke directly to the camera.

“Here we are again, on another day of mourning in this country,” Kimmel began on Wednesday night. “Once again, we grieve for the little boys and girls whose lives have been ended and whose families have been destroyed.”

The father and host spoke about the common ground that most of us share as the majority of Americans support background checks and common sense gun control. He had very harsh words for politicians as well. “Our cowardly leaders just aren’t listening to us, they’re listening to the NRA, they’re listening to those people who write them checks, who keep them in power, because that’s the way politics work.”

Kimmel also spoke directly to Texas Sen. Ted Cruz as well as Gov. Greg Abbot, urging them to reconsider their policies and take responsibility. “It’s okay to admit you made a mistake. In fact, it’s not just okay, it’s necessary to admit you made a mistake when your mistake is killing the children in your state,” Kimmel said. He also pointed to the success of stricter gun laws in countries like Scotland and Australia. “This is the only country where this keeps happening,” he said.

“This is not a time for moments of silence, this is a time to be loud and to stay loud and not stop until we fix this,” Kimmel continued. After reciting statistics of past horrific shootings, the comedian found it difficult to contain his emotion. He then asked the question on so many parents’ minds: “How does this make sense to anyone? These are our children!”

Kimmel’s sorrow was palpable, but also infused with anger as he ultimately urged Americans to take political action. “If you care about this, and we all do, it doesn’t make sure what party we vote for...we need to make sure that we do everything we can, that unless they do something drastic let’s make sure that not one of any of these politicians ever holds office again.”

This isn’t the first time the Live With Jimmy Kimmel! host has shared deeply personal or political beliefs on his show. Amid his son Billy’s health challenges, he urged people to “vote with your heart” before the 2020 elections and also made an impassioned plea for the Affordable Care Act. He also spoke about the Las Vegas mass shooting that hit so close to home in his own hometown.

Kimmel, of course, wasn’t the only late night host who covered the unconscionable school shooting. James Corden and Stephen Colbert, both fathers of three, shared their emotional takes on the tragedy. Jimmy Fallon, who has two daughters, spoke to former White House Press Secretary, Jen Psaki. The mother of two and future MSNBC commentator spoke of her shock and sadness. She also reminded viewers that we are not powerless, as there are ways to join organizations on gun reform and to help victims’ families.

After we finally put our kids to sleep, Kimmel, Corden, Colbert, and Fallon are reliably there to entertain us in the comfort of our beds. They make us laugh and keep us abreast of current events. But as parents and human beings, these fathers endure the same difficulty grieving these national catastrophes. They bear the same heavy responsibilities to speak to their own children about mass shootings and the latest tragedy in Uvalde. As talk show hosts but parents too, their hearts are shattered like the rest of us

More Like This
Meghan Markle Calls On Men "To Be Vocal" In The Aftermath Of Roe v. Wade Ending
Taraji P. Henson Says “Guns Have More Rights Than A Woman” At The 2022 BET Awards
Robb Elementary School Is Set To Be Demolished After Deadly Shooting
Ginger Zee Had A Perfect Response After A Troll Asked Her "Who's Raising Your Kids?"