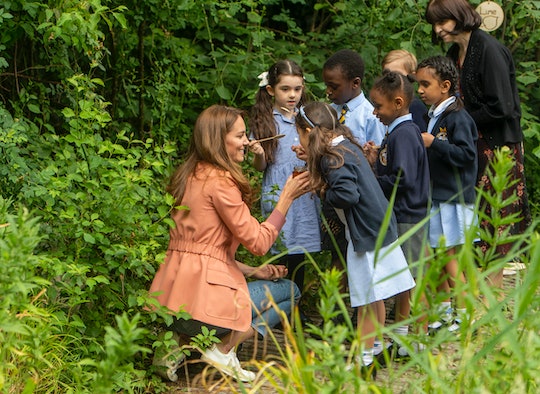 Kate Middleton Reveals She’s A Beekeeper & Makes Her Own Honey

If the Duchess of Cambridge ever needs a respite from the struggles of royal life, she can simply slip on some protective gloves and head on out to visit her bees. Yes, that’s correct. Kate Middleton raises bees at her country home of Anmer Hall. And if you don’t believe me, she was fully giving kids some of the honey that was made by said bees on her own property. If this whole royal business ever goes up in smoke, it’s nice to know she has a potential second career as a beekeeper if she likes. She can even go into business with her brother, beloved dog whisperer and passionate lover of bees James Middleton.

Almost as though they were a focus group for an upcoming product. Queen Elizabeth has her own beer and her own gin; could Kate Middleton have her own honey? She does come from an entrepreneurial family, after all.

Middleton isn’t the only family member to keep a beehive on her grounds. Her younger brother James Middleton got his own first hive as a gift from his family, including his royal sister, back in 2011. “My family - mum, dad and my sisters Catherine and Pippa - clubbed together to buy what for me was the most fantastic birthday gift imaginable,” Middleton wrote in a 2020 essay for The Daily Mail. “A delivery van arrived with a large buzzing box with the cautionary label: 'Live Bees.' Inside was the nucleus - the start - of my colony: 1,000 Buckfast bees.” Since then, his hive has grown to half a million bees in eight hives around the Middleton country home of Bucklebury Manor in Berkshire, per his Instagram post. I wonder if he gave his sister Kate her own hive for Anmer Hall in Norfolk.

Keeping bees actually makes total sense for the Duchess of Cambridge, who has spoken about gardening with her three kids in the past and encouraging them to grow their own plants themselves. All part of the natural, relaxed vibe of the little royals living in the country. And now they have all the honey they could ever want.