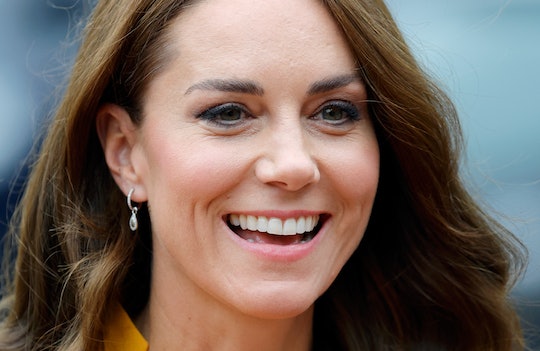 Kate Middleton Shares Insight On What It Was Like Naming George, Charlotte, & Louis

The whole world was waiting to weigh in and she felt the “pressure.”

Choosing a name for a baby is a difficult task for most parents. All too often, expectant parents have to contend with far too many opinions lobbied about from family members and friends about their child’s name. Now imagine what it’s like when the entire world is waiting to find out what you named your baby. This was the case for Kate Middleton, and she admitted during a recent surprise visit to a maternity ward that she felt serious “pressure” when she was naming her children.

The Princess of Wales visited the Royal Surrey County Hospital to talk to new moms about maternal mental health care, a cause she has long championed through her royal charity work. While there, Middleton was shown around the facility by midwifery deputy director Amy Stubbes, who told People that the mom of three was “very relatable” and “talked a lot about how it felt for her when she became a mother.”

One element of parenting she discussed naming her three children, 9-year-old Prince George, 7-year-old Princess Charlotte, and 4-year-old Prince Louis. “She just really talked about her own children including how they chose their names. A lot of the new mums and dads are thinking about how to choose names for their babies, and they spoke with her about how Kate and William made their choice,” Stubbes told People, adding that Middleton said the names they chose were both “favorites” of the Prince and Princess of Wales, but still she felt real “pressure” about naming her children.

“She said they were their favorite names and that obviously the world was waiting for them to name their children — and that felt like quite a big pressure!” Stubbes recalled to the magazine.

While Middleton asserted that she and Prince William had chosen their “favorite” names for their children, the process of naming a royal baby was actually a bit more complicated. The late Queen Elizabeth needs to approve the name, and Middleton reportedly wanted to name her first born son Alexander but was ultimately persuaded to use it as a middle name rather than as his first. Perhaps the pressure to name the future king got to her.

This is not the first time Middleton has been refreshingly open about dealing with pressure as a new mom. In a 2017 video to support Heads Together, the mental health foundation she helped to start along with Prince William and Prince Harry, she spoke about how motherhood had changed her. “Your fundamental identity changes overnight. You go from thinking of yourself as primarily an individual, to suddenly being a mother, first and foremost,” she said at the time.

As the Duchess of Cambridge and now as the Princess of Wales, Middleton has really become a champion for moms.