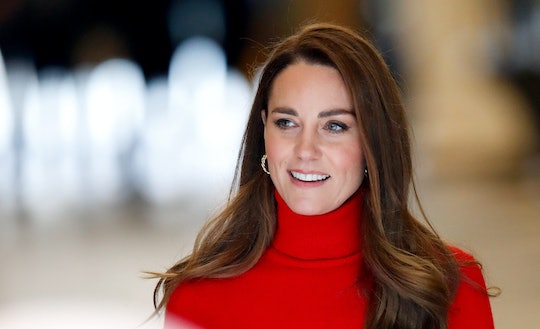 But will we see George, Charlotte, and Louis?

The Duchess of Cambridge has been featured in more than her fair share of television since marrying the Duke of Cambridge in 2011. There was her wedding in 2011, of course, and several documentaries about her life as a member of the royal family since then. But rumor on the street is that she’s about to go rogue and try her hand at being behind the camera, so to speak. Indeed, Kate Middleton is reportedly making a documentary herself about an issue that is near and dear to her heart. And we can only hope for glimpses of her adorable royal children in there somewhere too.

The Daily Mail recently reported that Middleton is currently in talks with a television executive in the United Kingdom to work on a documentary about early childhood development. The mom of three has made early childhood development her main focus as a royal, so this documentary seems comfortably within her wheelhouse. “Catherine is very interested in a programme. She thinks it could be a really significant way to explore an important subject,” a source told The Daily Mail. “She's been very impressed with William's efforts and knows how much he enjoyed making his Earthshot series.”

Middleton has been working diligently on the landmark “5 Big Questions on the Under Fives” survey that took place nationally both before and during the pandemic. That survey gained important insight into how Covid-19 impacted young children and how significant those early years were for childhood development. A television documentary certainly could have some impact, although no further details about filming or release are yet available.

It would be especially amazing if Middleton shares a glimpse or two of 8-year-old Prince George, 6-year-old Princess Charlotte, and 3-year-old Prince Louis. The documentary would be about children, after all. It’s not completely outside the bounds of possibility.

Kate Middleton is reportedly working on an early childhood documentary.

Middleton would be following the footsteps of her husband Prince William, who made his own documentary with Sir David Attenborough this summer about climate change and the Earthshot Prize, a yearly award given to people who make significant progress towards ending climate change. The couple also took part in a tribute to Prince Philip after his death in April along with the rest of the royal family, as well as a documentary to celebrate Prince Charles’s 70th birthday in 2018.

In some ways Kate Middleton is a bit of a veteran when it comes to documentaries. Now she just has to make her own.