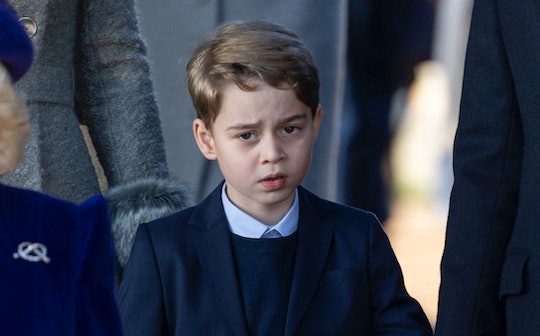 Prince George Is “Obsessed” With Snakes These Days

He is a nature lover, after all.

Every once in a while the Duke and Duchess of Cambridge give us a little tiny glimpse into the world of their children, and it’s always welcome. Shedding a light on the personalities behind the sweet faces of 8-year-old Prince George, 6-year-old Princess Charlotte, and 3-year-old Prince Louis paints us a picture of what their life really looks like behind the palace walls. Or in this particular case, slithering through the tall grass outside their country home of Anmer Hall, perhaps. Because according to Prince William, Prince George loves snakes.

Prince William and Kate Middleton were visiting Ulster University’s Magee Campus mobile petting zoo and chatting with students about the animals. Middleton admitted that the Cambridge family had welcomed “lots of animals during lockdown,” per The Mirror, as “animals are often like therapy.” They’ve welcomed chickens, for instance, which some could consider a nod to the Duke and Duchess of Sussex and Archie’s “Chick-Inn,” but it was one particular animal at the zoo that had Prince William thinking of his oldest son.

When he was handed an enormous snake to hold, he said, “George is obsessed with snakes, he’s going to be so upset he missed this.” Now I wonder if they’ll be adding python to their happy menagerie.

Prince George’s fascination with snakes is a bit of new information. Royal fans already knew that the future king was a fan of football (soccer), so much so that he had to be comforted by his dad when England lost to Italy at the Euro Cup in July. He’s also a fan of watching nature documentaries with his dad, which could be where his interest in snakes comes from.

As for his younger sister Princess Charlotte, she’s long been intrigued by spiders, particularly when she got to do fun homeschool assignments making spider sandwiches. And when she had her chance to ask Sir David Attenborough a question, she asked him if he liked spiders. I suspect the people at the mobile petting zoo knew about the Princess Charlotte/spider connection too, because Kate Middleton was given a tarantula to hold named Charlotte.

It sounds like the pet situation in the Cambridge household might lean away from the furry and cuddly animals in the future. Snakes and spiders at the palace? Why not.