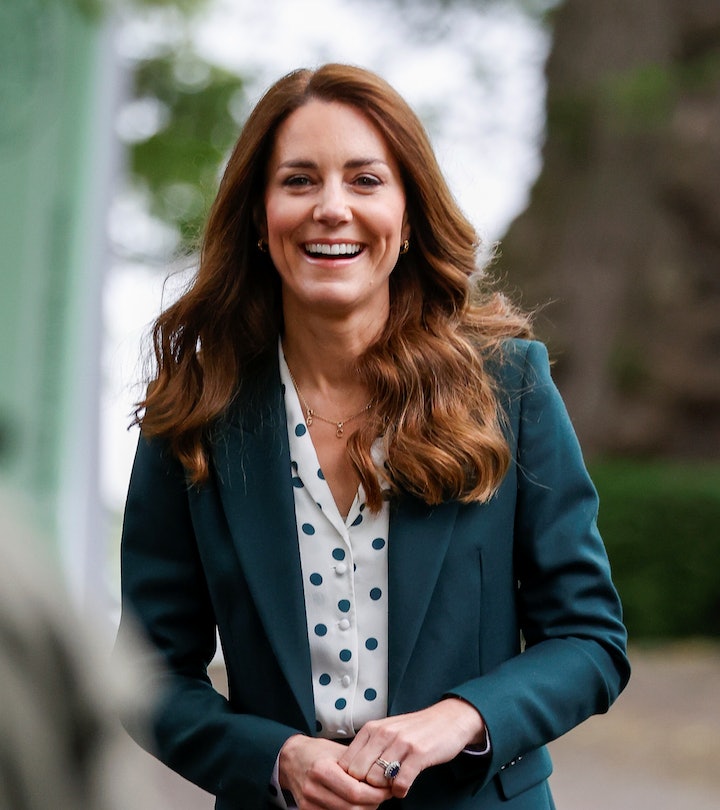 George, Charlotte, and Louis are all included.

The Duke and Duchess of Cambridge are currently on a royal tour of Scotland. They didn’t bring their three kids, 7-year-old Prince George, 6-year-old Princess Charlotte, and 3-year-old Prince Louis, but Kate Middleton found a sweet way to keep them close to her heart. As she has done so often in the past, Middleton wore a necklace that held special significance. This time around, it was a simple gold necklace featuring the initials of her three kids.

Middleton visited Starbank Park in Edinburgh, Scotland on Thursday to help out with some gardening, and wore a green blazer, patterned blouse, and a gold Alphabet necklace by jewelry designer Daniela Draper with the letters G, C, and L. The necklace sells for around $700, and it’s a truly lovely way for traveling moms like Middleton to hold their kids close when they have to be away. (Or just to look fashionable, either way it’s a great purchase.)

If Middleton doesn’t feel like wearing this customized necklace with her kids’ initials, she can always wear her other Daniela Draper piece: A $1,400 round pendant engraved with her kids’ initials worn back in August 2020. Draper told People at the time, “The Duchess of Cambridge is an incredible role model — I look up to her as a young woman and a mother. Seeing her wearing one of my designs was a very proud moment. Everyone in the workshop thinks it's just amazing. It's good morale!"

The Cambridge kids aren’t the only ones to get a lovely tribute via their mom’s jewelry choices. When Prince Philip died in April, Middleton paid a subtle tribute to both Prince Philip and Queen Elizabeth when she wore a four strand pearl choker to his funeral. The necklace was loaned to her by the Queen, and she had previously chosen to wear it for the couple’s 70th wedding anniversary in 2017. A lovely tribute to a long-lasting marriage, especially coming from one future royal consort to one who has just died.

It’s presumably pretty difficult for Middleton to spend time on the road away from her three kids, so wearing this necklace is a pretty beautiful way to keep them close to her.