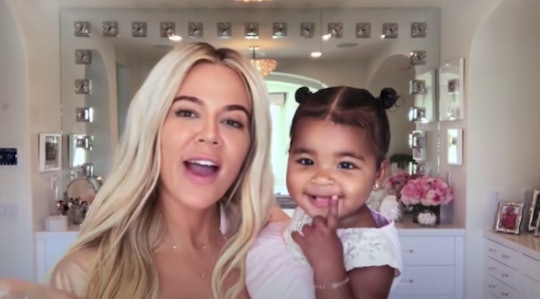 Khloé Kardashian Is Getting Backlash For Selling True’s Old Clothes

“Do the proceeds go to charity?”

Khloé Kardashian recently took to Twitter to announce that she had added some new items to sell on the Kardashian Kloset website. Namely, clothing her 3-year-old daughter True had grown out of and could no longer use. While selling old clothes that kids have outgrown is a pretty regular thing many moms do, some of Kardashian’s followers were not impressed. Not simply because she was selling her daughter’s clothing, which some appeared to believe was a bit ridiculous considering how wealthy the reality TV star is, but also because of the prices she’s charging for used clothing.

“Omg I miss seeing True in these outfits,’ the Good American designer tweeted last Friday, with a link to a Kardashian Kloset page featuring several items. Like a child’s size 4 swimsuit for $50, a little Lee jean jacket for $55, and a child’s Ralph Lauren jacket for $150. The average price of a girl’s brand new jackets sells on the Ralph Lauren website for around $100, so these prices do seem quite steep. Especially since True has supposedly already worn all of the clothing.

People were not impressed, with follower noting that Kardashian could be donating these clothes to help people in need. “Why in the world are you selling these?? COVID produced a lot of needy families…..Find one..or two…or three….,” @OU812Bee4 tweeted.

Khloe Kardashian is being criticized for selling True’s old clothes.

Another noticed a pretty steep price disparity, “I'm just curious is it priced so high cause their kids supposedly wore the stuff or what ijs 55$ for a used Lee jacket. they literally sell that brand at Wal-Mart..,” @ashleyatwell171 tweeted.

This social media user pointed out that, as an influencer, Kardashian could well have received these clothes for her daughter for free and is turning around to make a profit. “It’s not like Khloe even paid for these in the first place!” @Sunshineonetwo suggested. “Do you realize how many people and designers must have sent her free clothing in the hopes of being photographed? Khloe is making a 100% profit.”

Khloe Kardashian is being criticized for selling True’s old clothes.

For the most part, social media users were genuinely incredulous that Kardashian was selling used clothing instead of donating, “Have you heard about donating your kids clothes? You should try it sometimes. Us poor people we do that all the time,” wrote one user, while another simply asked, “Do the proceeds go to charity?”

Kardashian was indeed called out in 2020 for selling clothes that had been donated to her on the Kardashian family’s second hand clothing website by designer Christian Cowan. At the time, Cowan wrote on his Instagram Story, “Why are my runway samples I loaned you being sold on your website?” BuzzFeed reports that the dress in question was removed.

The thought of someone as wealthy as Khloé Kardashian selling her daughter’s old clothes clearly rubbed some people the wrong way, perhaps especially during a pandemic.