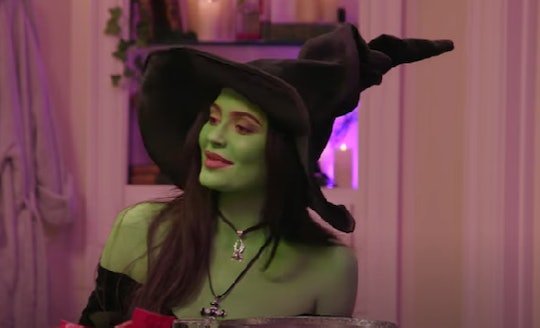 There’s really nothing quite like a Kardashian holiday party. Not that any of us have ever been, mind you, but seeing the decor, the glittering guest list, multiple costumes and photo shoots that deserve their own Oscar in some cases, really gives a sense as to how much the spooky season means to the family. It means dressing up, getting glam, decorating. Or at least, that’s what it used to mean for youngest daughter Kylie Jenner. But now that she’s a mom, her Halloween is spent quite differently. And, it turns, out, it’s way more fun for her.

Jenner spoke to Hailey Bieber about her shifting views on Halloween for a recent episode of Bieber’s YouTube series Who’s In My Bathroom, where the two painted themselves green a la the Wicked Witch of the East in The Wizard of Oz. Bieber asked her pal, who is mom to 4-year-old daughter Stormi and an as-yet-to-be-named 8-month-old son with partner Travis Scott, how Halloween has changed for her now that she’s a mom.

“All I want to do is trick-or-treat with my kids,” Jenner said. “It’s all about them now, whereas before it was all about me.”

“Halloween is more fun now because I get to live through them,” Jenner added. “My son is, like, eight months old, but I got to live through my daughter the last few years. And how excited she gets. It’s just so much fun.”

This year the entire family was decked out in white to go trick-or-treating, a brave choice indeed. Especially for a baby. Stormi and her mom wore matching white angel costumes with Stormi’s baby brother, while Scott appeared to go with a simple white pants and white denim jacket look.

Stormi has had some pretty incredible Halloween costumes through the years, including dressing as a little Minion from Despicable Me in 2020 and even wearing a tiny replica of her mom’s 2019 Met Gala purple gown when she was not yet two years old. No wonder Jenner is having such a great time celebrating Halloween as a mom. It’s a lot more fun when you have a kid who gets excited about their costumes like Stormi. Hopefully the baby formerly known as Wolf will love it as he gets older too.