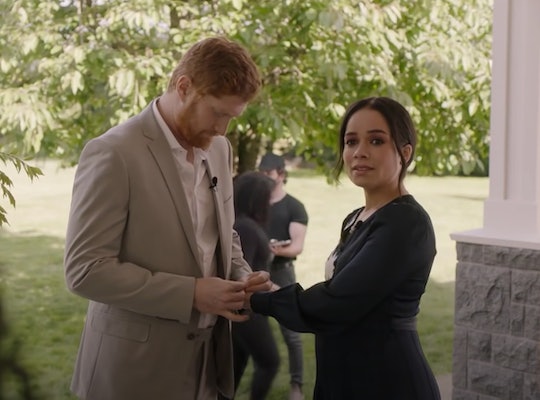 Because you really can’t get enough of Lifetime’s Harry & Meghan movie series.

Millions of people tuned in to watch Prince Harry and Meghan Markle’s interview with Oprah Winfrey in early March as the couple recalled what led to their decision to step down as senior members of the royal family. We watched it all unfold in the media, in headlines, and interviews for the past year. And now, a Lifetime movie about Meghan and Harry’s royal exit has arrived.

Harry & Meghan: Escaping the Palace, the network’s third film about the Duke and Duchess of Sussex, might be the most dramatic yet. The Harry & Meghan Lifetime film series has reenacted some of the couple’s biggest moments. Harry & Meghan: A Royal Romance was all about how their relationship came to be and 2019’s Harry & Meghan: Becoming Royal depicted how their lives changed after getting married.

As for Harry & Meghan: Escaping the Palace, Lifetime has put the network’s signature spin on the events leading up to the couple’s break from the royal family and their decision to leave everything behind.

Harry & Meghan: Escaping the Palace Details It All

“The movie will detail Meghan’s growing isolation and sadness, their disappointment that ‘The Firm’ was not defending them against the press’s attacks, and Harry’s fear that history would repeat itself and he would not be able to protect his wife and son from the same forces that caused his mother’s untimely death,” Lifetime shared in a press release. “Harry & Meghan: Escaping the Palace will also reveal the private family feuds between Will and Harry, Kate and Meghan, and Harry with Will and Charles, that led to the ultimate break from royal ties.”

This sounds a lot like what the couple talked about in their interview with Winfrey. During their sit-down, Harry said that he was “trapped within the system” and expressed his fears of history repeating itself, while Meghan opened up about her struggles with mental health.

Needless to say, this movie is going to tackle a lot. Beyond stepping down from their roles, the couple has also moved to the United States and welcomed a baby girl earlier this year.

The First Trailer Is Here

Lifetime released the first official trailer on Wednesday, July 7, giving people a full glimpse at Queen Elizabeth, Prince William, Kate Middleton, and the titular couple, as well as teasing as to how Harry and Meghan will “escape the palace.”

“I will do everything in my power to keep my wife and son safe,” Harry, played by actor Jordan Dean, says directly into the camera. Meanwhile, Middleton, Prince William, and the Queen seem to be opposing forces. “The monarchy will always survive,” the Queen, played by Maggie Sullivun, says matter-of-factly into the camera. Meanwhile Meghan, played by Sydney Morton, poses one big question. “Have I made the world’s biggest mistake?”

In a sneak peek released in June, you can get a glimpse at the bond between Harry and Meghan and even see a glimpse of their recreated interview with Oprah.

Holy smokes, it looks so dramatic.

Take A Look At The Characters

On May 19, Harry and Meghan’s third wedding anniversary, Lifetime released the first photo from the film on Twitter.

The four different actors who portrayed Harry and Meghan in the first two movies will not reprise their roles in this new film, Lifetime announced on Wednesday. High Maintenance actor Jordan Dean will star as Harry in the new film, according to The Hollywood Reporter. And She’s Gotta Have It actress, Sydney Morton, will portray Meghan.

Harry & Meghan: Escaping the Palace Will Premiere In 2021

An official premiere date has not been finalized, but you can expect to see the movie on Lifetime sometime in the fall of 2021.

You Can Watch It On Lifetime

The only way to watch Harry & Meghan: Escaping the Palace is by watching it on Lifetime when it premieres.

While you wait for the latest installment in the Harry & Meghan film series to premiere, you can stream the first two films on Lifetime Movie Club, Lifetime’s streaming service. You will, however, need a subscription to watch these films which costs $3.99 a month after a free, seven day trial. You can also buy a digital copy of the first film, Harry & Meghan: A Royal Romance, on Amazon Prime Video for $2.99, and buy a digital copy of the sequel, Harry & Meghan: Becoming Royal on Amazon Prime Video for $4.99.

Whether you’re one of the millions who tuned in for their Oprah Winfrey interview or just love a good Lifetime flick, the newest Harry & Meghan movie series sounds like it’ll be packed with drama.

This article was originally published on March 25, 2021