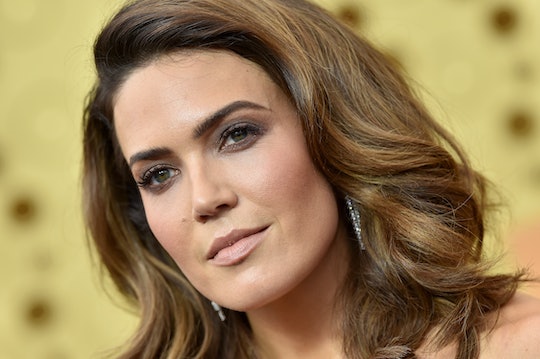 "I'm about to give birth any second and I'm not afraid to draw healthy boundaries."

In a recent Instagram Story, actress Mandy Moore spoke out after a publication canceled an interview with her because she would not talk about her past trauma. The This Is Us star, who's due to give birth to her first child "any second" now, shared a screenshot of an email from an unnamed journalist about their outlet's decision to axe plans to interview her, along with an important message about setting boundaries for herself.

In the email, which appeared to be sent to a member of Moore's publicity team whose name is obscured, the unnamed publication said it may be "best to put this [interview] on pause for the time being" after Moore's team let them know she would not discuss a painful subject from her past.

"While I completely understand Mandy's decision not to want to discuss (censored name), from our perspective it would be difficult not to address it in the interview or subsequent piece," the email read. "We're keen to do a supportive interview which profiles Mandy's entire life and career, and part of that would inevitably involve discussing her time with (censored name) given the impact he has had on her life and career."

"If Mandy doesn't want to talk about it this though we have to respect that and it would be wrong for us to proceed with the interview," the email concluded.

On her Instagram Story, Moore wrote that she was initially hesitant to share this email publicly, but found herself still "thinking about it" when she woke up the following day. "My blood is still boiling," she wrote.

"This is from a publication who reached out eager to do a comprehensive piece on my life and career," Moore explained. "When they were told that I had spoken plenty about a certain subject in my life and would have no further comment (truly there are countless interviews they could pull from, that story is over and there's nothing more to say) this was the response we got back."

Moore pointed out that any comment she could make about her past trauma would just become "clickbait" that would give "them the energy and time they seek and have already stolen from too many for too long."

Moore went on to say that she found the message this publication sent when canceling an interview over her refusal to discuss her past trauma "insulting and so out of touch with the cultural discussion around abusive relationships, directly linking someone's value back to their abuser."

"The refusal to interview someone unless they're willing to relive their trauma publicly? No thank you," she said.

Moore, as she noted on her Instagram Story, has been working in the entertainment industry for years. Decades, in fact. Beyond her role on NBC's hit drama This Is Us, Moore also released a new album in 2020 called Silver Landings. Indeed, when it comes to her professional life, there is plenty to discuss. As for her personal life, she's also been candid about several aspects, including her pregnancy with her first child, fertility, as well as her marriage with her husband Taylor Goldsmith. In a January interview with Romper, for instance, Moore shared that Goldsmith has "been suited to be a father pretty much his whole life."

Moore, who's expecting a baby boy, also opened up to Romper about her desire to "raise an intelligent, feminist, loving, compassionate young man, who respects women, and who understands boundaries."

It's incredibly unfortunate that Moore had to go through this harrowing experience in the last days of her pregnancy. As she put it, "I'm about to give birth any second and I'm not afraid to draw healthy boundaries."