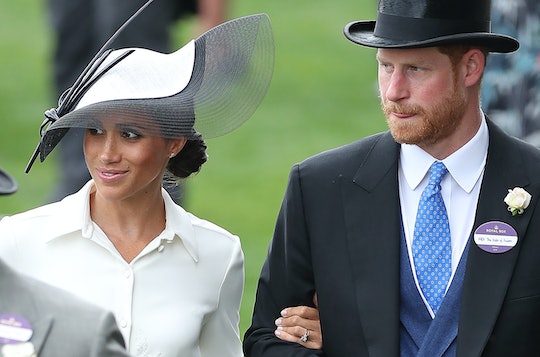 “Had she not been supportive, they would not have used the name.”

Days after welcoming their baby girl, Lilibet “Lili” Diana, Meghan Markle and Prince Harry are responding to claims from a Buckingham Palace source that they did not ask Queen Elizabeth for her blessing to use her family nickname as their daughter’s name.

Lilibet is a deeply personal name for Prince Harry’s grandmother, a nickname used by her own father King George V from the time she was a toddler as well as her late husband Prince Philip. The couple noted in their official announcement of the baby’s birth on their Archewell website that Lili is specifically “named after her great-grandmother, Her Majesty The Queen, whose family nickname is Lilibet.” And her middle name, Diana, “was chosen to honor her beloved late grandmother, The Princess of Wales.”

While Page Six reported earlier this week that the Duke and Duchess of Sussex called the queen to ask permission to name their daughter Lilibet, the BBC is now reporting something different. Citing an unnamed Buckingham Palace source, BBC royal correspondent Jonny Dymond reported on Tuesday that Harry and Meghan had not asked Queen Elizabeth about naming their daughter Lilibet before she was born.

Meghan and Harry quickly hit back. “The duke spoke with his family in advance of the announcement — in fact his grandmother was the first family member he called,” a spokesperson for the couple told the BBC. “During that conversation, he shared their hope of naming their daughter Lilibet in her honour. Had she not been supportive, they would not have used the name.”

Now Harry and Meghan, who are also parents to 2-year-old son Archie, have issued a rare legal warning to broadcasters and news publications via their lawyers, reportedly explaining that the BBC’s claim that Queen Elizabeth had not approved her great-granddaughter’s name was not to be repeated, as CNN reported. The law firm that represents the couple reportedly sent a letter to various news broadcasters and publishers saying that the BBC’s report “was false and defamatory and should not be repeated.”

The concept of naming their daughter after Queen Elizabeth was not exactly unusual. The Duke and Duchess of Cambridge also honored the queen when they named their daughter Charlotte Elizabeth Diana. And while there has been some significant distance between Prince Harry and the rest of the royal family, perhaps especially since he and Meghan sat down for an interview with Oprah Winfrey in March, the Duke of Sussex reportedly remains very close to his grandmother. In his interview with Winfrey, he said that he and his grandmother had kept in close contact via video calls since he stepped back from the royal family, and even Lilibet has already been introduced to her great-grandmother by video call.

It’s worth noting that every senior member of the royal family, including Queen Elizabeth herself, took to social media to say they were “delighted” with the news of Lilibet’s birth. She wrote in a post on Instagram, “Congratulations to The Duke and Duchess of Sussex on the birth of Lilibet Diana! The Queen, The Prince of Wales and The Duchess of Cornwall and The Duke and Duchess of Cambridge are delighted with the news. Lilibet is Her Majesty’s 11th great-grandchild.” Perhaps that says it all.