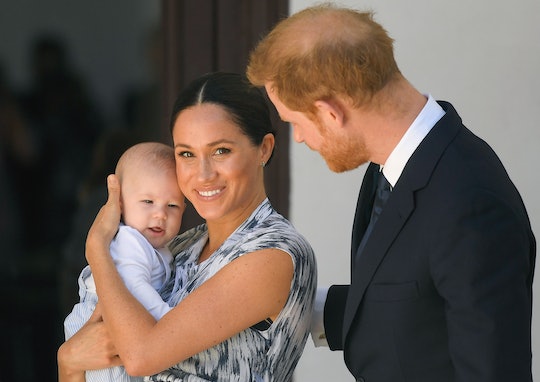 Archie's Nursery School Classmates See Him As "Just One Of Them"

All while learning how to code, emotional literacy, and more.

If there was every any doubt that 2-year-old Archie Harrison Mountbatten-Windsor was well on his way to being a beautifully evolved human, let this end it. As it turns out, Meghan Markle and Prince Harry have sent their son to a nursery school that’s all about teaching mindfulness, sustainability, and emotional literacy. Oh and let’s not forget coding because of course he is going to be as well rounded as they come.

The Duke and Duchess of Sussex are fully embracing that laidback, California lifestyle ever since they moved to their home in Montecito, and it seems little Archie is being raised to be on the same page. The 2-year-old, who is big brother to baby girl Lilibet “Lili” Diana, reportedly attends a local nursery school that focuses on “emotional literacy” as well as being environmentally friendly, kind, and thoughtful, according to The Mirror. And he’s relatively anonymous, despite being one of the most famous toddlers on the planet.

A fellow parent from the nursery school told The Mirror that the little boy is treated like any other kid at school. “Harry often drops Archie off and picks him up, and seems like a good dad,” the parent said. “All the parents have been laidback in welcoming Harry and Meghan, without making a fuss. And to the other kids, Archie is just one of them. They don’t know his parents are royalty, and probably wouldn’t care — unless Meghan was a Disney princess.”

Meghan Markle and Prince Harry are raising an evolved human.

Archie is already practicing some of his nursery school lessons at home, showing kindness to animals as he does with his very own chicken coop called “Archie’s Chick-Inn,” as we saw in his parents’ Oprah Winfrey interview last March. He has also made sure to remind visitors to “hydrate” before they leave the house. His parents shared that sweet little tidbit back in March of 2021.

The Sussex family are leading a decidedly different life in California from the one they lived as senior members of the royal family in England. These days they are a family of four, posing for photos in jeans and bare feet for Christmas, and learning to move through the world with emotional literacy. How’s that for change?