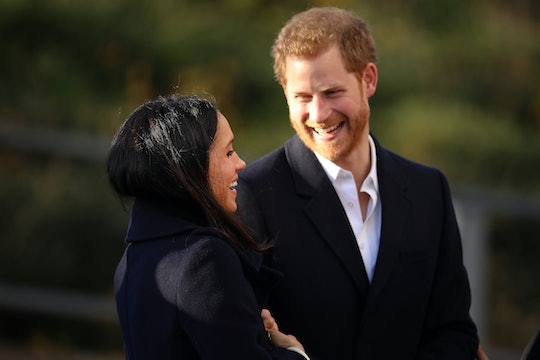 They may not be royals like Prince William and Kate Middleton, but Meghan Markle and Prince Harry have new neighbors who are surely considered Hollywood royalty. What's more, they're moving in with a potential playmate for the Duke and Duchess of Sussex's son, Archie.

According to Variety, new parents Orlando Bloom and Katy Perry recently bought a $14.2 million, 8.9 acre property in Montecito, California, the same neighborhood the Duke and Duchess of Sussex reside in with their 1-year-old son Archie.

In addition to a guesthouse with a full kitchen, a tiled swimming pool, and a full-sized sports court, as Vogue reported, Bloom and Perry's new home, which was built in 1934, will no doubt have lots of playroom for their daughter, Daisy Dove Bloom, whom the couple welcomed back in August. And when she's a bit older, perhaps her neighbor Archie could visit for a playdate while the Blooms and Sussexes chat about being first-time parents. One can dream, right?

Or Bloom and Perry could pop over to Markle and Prince Harry's swanky new digs. According to Variety, the couple's Mediterranean-style home in Montecito features nine bedrooms and 16 bathrooms, and sits on more than nine aches.

With all that space, it's no doubt that the Duke and Duchess of Sussex have their hands full keeping up with little Archie, who's apparently walking and running nowadays. "We were both there for his first steps," Prince Harry told Malala Yousafzai during a virtual interview earlier this month. "His first run, his first fall, his first everything."

While neither set of famous parents have confirmed if they have any cookouts and playdates planned for the future, especially with the COVID-19 pandemic still going on, there's no harm in hoping. After all, the couples have crossed paths before. Last September, in fact, all four were guests at a wedding party for fashion designer Misha Nonoo in Italy, according to the Daily Mirror.

Who knows, perhaps if they do ever meet up, other famous neighbors will drop by, too. According to Hello! Magazine, celebs like Ellen DeGeneres, Gwyneth Paltrow, Oprah Winfrey, and Natalie Portman all live nearby as well. Archie's second birthday is just seven short months away...