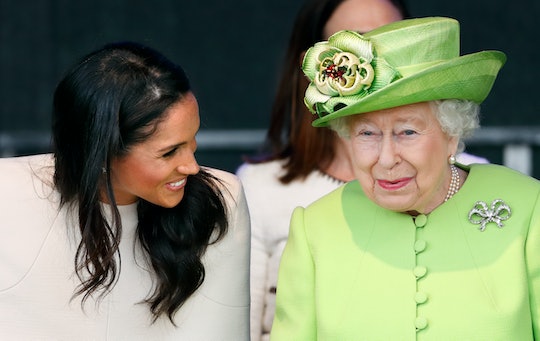 Back in 2018, Meghan Markle was newly married to Prince Harry and, perhaps even more significantly, newly dipping her toes into what life would be like as a senior member of the royal family. She was invited on a tour with Queen Elizabeth herself, with the two of them heading off by train on a royal tour, which could have been incredibly intimidating, of course. But the thing the Duchess of Sussex remembered in their Netflix documentary Harry & Meghan was not the pomp and circumstance of the day. It was a sweet, grandmotherly gesture from Queen Elizabeth as the two of them were sitting in the car together. A moment that clearly meant a great deal to her at the time.

Meghan joined Queen Elizabeth in June 2018 aboard the royal train on a visit to Cheshire, and when the two royals were chauffeured around by car in between engagements they shared a special moment.

“She had a blanket and she put it over my knees,” Meghan shared in the docuseries. “And we’re sitting there in this car under this blanket together.” At that moment, Meghan explained, she thought, “I recognize and respect and see that you are the queen, but in this moment, I’m so grateful that there is a grandmother figure. Because that feels like family.”

Meghan went on to note that she was “so, so close to my grandmother,” a woman she took care of in her final years. Which made her “good day” with Queen Elizabeth even more poignant for the newly married Duchess of Sussex. “We laughed,” she said.

Queen Elizabeth was in an unusual position as Prince Harry’s beloved grandmother but also the reigning monarch. She had a public persona as head of the royal family, but also a private one as a mother and grandmother and great-grandmother. When Queen Elizabeth died in September 2022 at the age of 96 years old, Meghan and Harry had long since stepped down from their senior roles in the royal family to live independent lives in California with their two children. But they never stopped loving and respecting Queen Elizabeth, even naming their daughter Lilibet after Her Majesty’s own nickname.

Yes, she was the queen. But she was also Prince Harry’s granny, a woman who wanted to share her lap blanket with her grandson’s new wife. What a lovely way to be remembered.