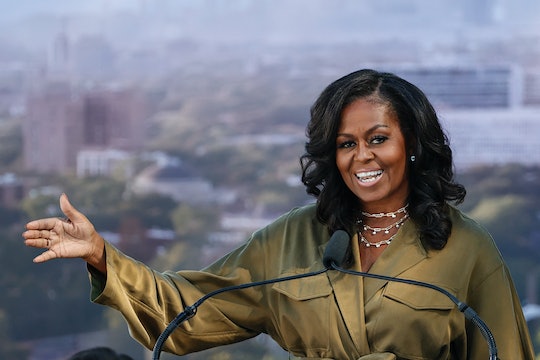 For a great cause, too!

While former first daughters, Malia and Sasha Obama, typically stay out of the spotlight and keep their lives private, every now and then their mom shares a rare photo of them on social media. Former First Lady, Michelle Obama recently posted a glimpse into her daughters’ much-speculated-upon lives with a beautiful new family photo on Instagram.

While Michelle Obama is arguably one of the most admired women of all time, one of the many reasons she’s so popular is because she happens to be a relatable mother (with amazing fashion, too). Whether she’s joining other celeb moms in a PSA to promote vaccines or flexing her impressive birthday moves, we’re here for it all.

In a recent Instagram post, Obama went full force to support her husband and former President Barack Obama’s latest endeavor, a new Netflix show on national parks, Our Great National Parks. “Over the years, @BarackObama and I have been lucky enough to show our girls some of the magic of our world’s natural wonders. This time, Barack wants you to join in on the fun with his new @HigherGroundMedia show, Our Great National Parks, which is streaming now on Netflix,” Obama captioned her post.

“Whether you’re visiting a national park or taking a walk around your neighborhood, there’s so much out there to explore,” she added. “We hope the show inspires you to take a trip outdoors. If you do, be sure to take part in the #WildForAll Challenge at WildForAll.org. Can't wait to hear all about it!” The Wild For All website notes that the challenge aims to help anyone join a global community of others who want to take everyday steps to protect nature (while also competing for prizes!).

In the first Instagram picture, the Obamas kept it pretty casual in athleisure, button-downs, and sunglasses while posing in a forest.

In other photos, the former first lady is pictured against beautiful natural backdrops with several groups of kids, some wearing Let’s Move! t-shirts. The Let’s Move! initiative was implemented by Obama while in office, with a mission to help kids lead healthier lives and tackle childhood obesity.

President Obama isn’t the only one in the family dipping into TV these days. In an interview with Vanity Fair, actor Donald Glover confirmed that Malia, now 23, was hired as a writer for his critically acclaimed show, Atlanta. Glover had nothing but gushing things to say about the recent Harvard grad: “She’s just like, an amazingly talented person,” said Glover. “She’s really focused, and she’s working really hard.”

These days, 20-year-old Sasha is a college student who understandably keeps a very low profile on campus. The Obama sisters will likely remain famously-private and just try to live out their 20s in paparazzi-free peace and quiet. For those of us with the non-stop curiosity for what life might be like for anyone who grew up in the White House, we’ll just have to settle for these presidential kids’ movies instead.