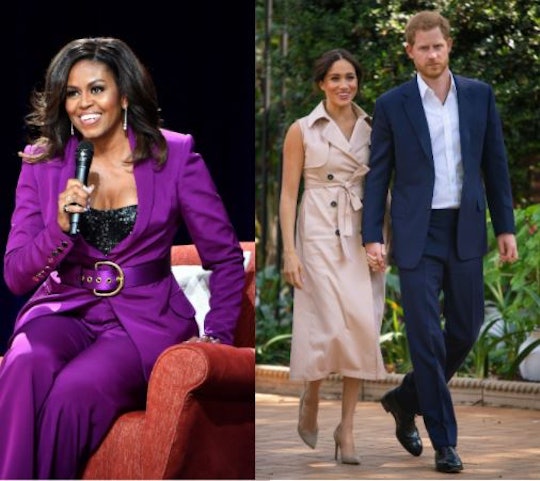 “My hope is that, when I think about what they’re going through, I think about the importance of family and I just pray that there is forgiveness.”

Michelle Obama hopes forgiveness is on the table when it comes to the current drama, controversy, and heartbreak surrounding the British royal family. Weeks after it aired on CBS, the former first lady weighed in on Meghan Markle and Prince Harry’s interview with Oprah Winfrey, which touched on the Duchess of Sussex’s struggles with her mental health and accusations of racism.

During a sit-down on Access Hollywood last week, Obama shared her thoughts on the bombshell interview that aired on March 7. Meghan and Harry, who are currently expecting their second child together, got candid with Winfrey about their time as royal seniors and what ultimately led to them stepping down from their duties last year. The couple also made disturbing claims, including Meghan allegedly being denied mental health treatment and claims that royal family members had conversations about Archie’s skin color and how dark it may be when he was born.

Since the interview, the royal family has responded to the allegations. Buckingham Palace released a statement saying in part, “The whole family is saddened to learn the full extent of how challenging the last few years have been for Harry and Meghan.” The statement also noted the issues of race are “very concerning” and are “taken very seriously and will be addressed by the family privately.”

Prince William has also spoken out in a brief comment since the interview. Last Thursday, the Duke of Cambridge, told a Sky News reporter that the royal family is “very much not a racist family.”

As the first African American first lady of the United States, Obama is all too familiar with racism and sympathizes with Markle. “Race isn’t a new construct in this world for people of color,” Obama said in an interview with Jenna Bush Hager on NBC's Today Show, “and so it wasn’t a complete surprise to hear her feelings and have them articulated.”

During her chat with Access Hollywood’s Mario Lopez Obama said, “My hope is that, when I think about what they’re going through, I think about the importance of family and I just pray that there is forgiveness and there is clarity and love and resolve at some point in time. Because there’s nothing more important than family.”

Obama’s comment could refer to the strained family relations the couple shared with Winfrey, specifically the Duke of Sussex’s relationship with his father, Prince Charles, and his brother, Prince William. During the interview, Harry shared that his father had stopped taking his calls at one point after announcing his plans to step down from royal duties. And he and his brother are just in a period of “space.” But, ultimately, Harry told Winfrey that he would always be “be there for him.”

However, since the interview, CBS’ Gayle King reported that Prince Harry has spoken with his father and older brother, but the chat was “not productive.”

"They both want to move forward with this and they both want healing in this family," King reported, referring to Meghan and Harry.

Obama shared with Hager that she had one hope for the Sussexes and the rest of the royal family. “The thing that I hope for and the thing I think about is that this first and foremost is a family,” she said on the Today Show. “And I pray for forgiveness and healing for them, so that they use this as a teachable moment for us all.”