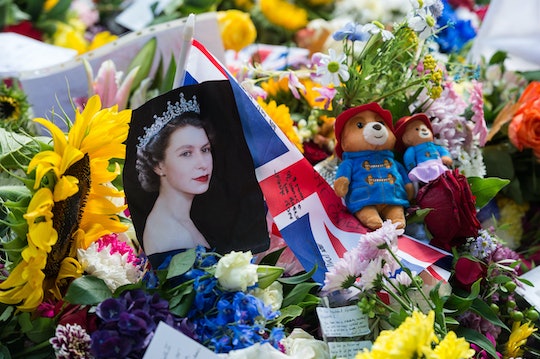 Over 1,000 Paddington Bears Left To Honor Queen Elizabeth Will Be Given To Sick Kids

The stuffed bears are “currently being well looked after at Buckingham Palace.

When Queen Elizabeth died in early September, millions of people around the world mourned the 96-year-old monarch in their own ways. For some it was a moment of silence, for others it was waving the flag at half mast or drinking a cup of tea in her honor or joining the queue to pay their respects as she was lying-in-state. But for thousands of people in London, they said goodbye to Her Majesty by leaving stuffed Paddington Bears at royal residences. And now Buckingham Palace is passing those very special toys along to some very special children.

Royal fans will remember that Queen Elizabeth and Paddington Bear starred together in a very special video to honor her Platinum Jubilee in June. The two British icons enjoyed a cup of tea together at Buckingham Palace in the sweet video, and when poor old Paddington made a mess of the sweets laid out for the two of them, they shared marmalade sandwiches that Queen Elizabeth pulled out of her purse.

Months later, Queen Elizabeth’s loyal subjects were remembering her enduring ties to Paddington Bear by leaving thousands of toys in his image (as well as marmalade sandwiches) at her royal residences around the UK.

The royal family decided to have all of those bears professionally cleaned and delivered to one of the Queen’s former patronages, children’s charity Barnardos, where they will be dispersed to children in need. Queen Consort Camilla, who took over the royal patronage in 2016, posed with some of the bears at Clarence House on Oct. 13, the 64th anniversary of the publication of the first Paddington book.

A message on the Royal Family Instagram page reassured followers that the bears were being well cared for in the interim. “The bears have been scrubbed up to look their best, before they are delivered to their new home. The bears are currently being well looked after at Buckingham Palace, Clarence House and in the Royal Parks nursery located in Hyde Park.”

Paddington Bear has long held a solid relationship with the royal family, the Prince and Princess of Wales included. The pair visited Paddington Station when Kate Middleton was pregnant with Prince Louis in 2017 alongside Prince Harry. There the future Queen Consort danced with Paddington as her husband and brother-in-law watched.

What a fitting final tribute to Queen Elizabeth. Paddington Bear toys given with love in her name to children in need.