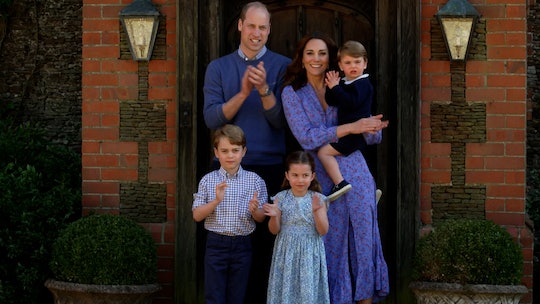 Of course the talented photographer has her best portraits of George, Charlotte, and Louis displayed.

In a recent Zoom conversation with Armed Forces family members, eagle-eyed royal fans spotted photos of Kate Middleton's kids displayed at Kensington Palace. Sure, she might be living in a palace with royal courtiers and the like, but this mom of three apparently keeps her shelves super casual with sweet, candid photos of her little ones.

The Duchess of Cambridge has always had an eye for photography, especially when her three kids are the subjects. Photos she has taken over the years of 7-year-old son Prince George, 5-year-old daughter Princess Charlotte, and 2-year-old Prince Louis have been widely applauded for their warmth and candor, offering little glimpses into the personalities of the royal kids fans might not have otherwise seen. Middleton's passion for photography was recognized when she became the royal patron for the National Portrait Gallery, and during the coronavirus quarantine in the United Kingdom she spearheaded the "Hold Still" photo campaign which encouraged people to document life during the pandemic.

Middleton's passion for photography, and her kids, was on full display during a Zoom chat with Armed Forces family members who have lost loved ones on Wednesday. As she spoke, her own little loved ones were seen in framed photos in the background.

Displayed on her shelf were photos of each of her kids; one of little Prince Louis being snuggled by his mom when he visited a garden she created in 2019 for the Chelsea Flower Show. Another of Prince George on his seventh birthday, sweaty and laughing in the grass and wearing his football jersey and truly looking just like his dad Prince William at the same age. And finally, a photo of Princess Charlotte and Prince George wearing their school uniforms on their way to their first day of school at Thomas's Battersea in London.

In other words, normal photos that show a life lived outside of royal duties. A life as a mom of three. Even as both Middleton and Prince William are being praised for bringing comfort to people across the United Kingdom during the coronavirus pandemic, they are still parents. People who are trying to raise their little ones in a difficult, uncertain world just like the rest of us.

Middleton's family shelf of photos on display at Kensington Palace is another one of her "just like us" moments. She's a mom who is proud of her kids and loves to document their lives. Just like us.

More Like This
The Cambridge Kids Could See A Big Change At Their New House
Queen Elizabeth Doesn’t Really Get Eat-In Kitchens
20 Adorable Photos That Prove Prince William & Princess Charlotte Are Thick As Thieves
Kristin Bell Shared Some Sweet, Rare Photos Of Her Daughters From A Family Vacation