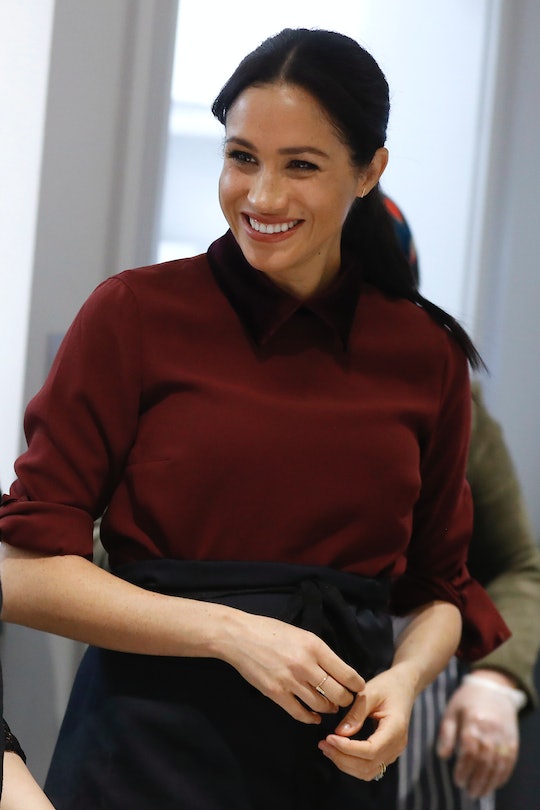 “Baked by The Duchess — with lemons from her garden!”

As she gets closer to giving birth to her first daughter this summer, pregnant Meghan Markle baked a cake for volunteers using lemons from a tree on her own property in Montecito, California. The Duchess of Sussex has long been known as someone who loves to cook for people, perhaps even more now that she’s pregnant... the joys of nesting.

Markle baked a cake for volunteers in Chicago working at the World Central Kitchen to thank them for all of their hard work. World Central Kitchen has been providing meals to families in need in partnership with Markle’s non-profit foundation Archewell, which she started with husband Prince Harry.

To show their appreciation for the acts of compassion shown by volunteers, most of whom are women, during Women’s History Month, the Duke and Duchess of Sussex sent a sweet letter of gratitude, per Entertainment Tonight. “Sometimes we overlook how much it matters to express thanks and show appreciation,” the letter read. “Perhaps we realize now more than ever that fundamental human moments, like enjoying a meal together, fill us up with more than just food (even if that food is delicious!).”

The sweet letter was accompanied by a sweet treat; a lemon olive oil cake. Which the World Central Kitchen noted in a tweet was “baked by The Duchess — with lemons from her garden!”

This isn’t the first time Markle has used food as a connection to help a charity; she co-wrote a charity cookbook with women to support the Hubb community kitchen while she was still a senior royal in 2018. And last June she and her husband supported a charity called Homeboy Industries by masking up and baking bread together in Los Angeles.

Markle, who is mom to 22-month-old son Archie and expecting a daughter this summer, has a reputation as something of a foodie. Especially when it comes to making sweet treats. Prince Harry told James Corden in an interview earlier this month that Markle has made waffle lovers out of them both. “Meg makes up a beautiful organic mix, in the waffle maker, flip it, out it comes," Harry told Corden. "He loves it. And now I have waffles for breakfast, bit of yogurt, bit of jam on top — I don't know if that's the right thing to do — bit of berries maybe, a little honey, maybe some syrup."

Now that the little Sussex family is well and truly ensconced in their new home in Montecito, California, Markle can get down to one of the best parts of pregnancy. Nesting. Baking cakes for volunteers, making waffles for her little boy.

Filling her home with all of those sweet smells as she waits for her little girl to arrive.