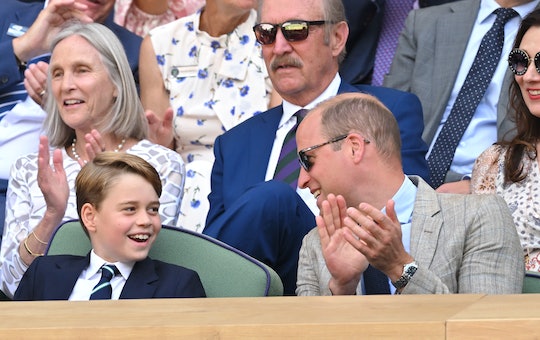 When you imagine the royal kids speaking to their parents, what do you think they call them? Not Your Majesty, that’s awfully over the top. Perhaps mumsy? Daddy? Mama but like ma-mah? Father? Wrong, you’re completely wrong. Apparently Prince George’s nickname for dad Prince William is very common. Especially if you’re an American living in the middle of the 20th century if you ask me.

Back in 2018, as People reports, Kate Middleton and Prince William took their two oldest kids to Leicester for a royal visit. While 7-year-old Princess Charlotte and 9-year-old Prince George were greeting the crowd, a royal fan named Fiona Sturgess overheard a conversation between Middleton and Prince George. “Kate said that William was playing football with the children last night and one of them said, I think it was George, 'Are you playing football tomorrow, Pops?’”

The royal family has always loved a nickname, as evidenced by Queen Elizabeth being called everything from “Lilibet” to “Cabbage” to, in the case of Prince William when he was a young boy, “Gary.” Prince William and Kate Middleton have carried on the nickname tradition in their own household. They apparently call their oldest son “Tips” because his initials are PG and there’s a tea brand in England called PG Tips. Prince William’s nickname for daughter Princess Charlotte is “Mignonette,” French for “cute one” as heard in a video from 2019. And as for his wife, Prince William has been heard calling her “poppet,” “darling,” and “babe.”

Whether or not Prince George’s two younger siblings, including 4-year-old Prince Louis, also call their father “Pops” is anyone’s guess. We know their 3-year-old cousin Archie calls his dad Prince Harry “papa” and calls their mutual grandfather “pa,” so everyone seems to be keeping their dads’ names in the same region.

I hope they do call Prince William “Pops” though. It’s very retro. And decidedly American-sounding for the future King of England.